North meets South meets West meets East” was the topic of this years belgian MOS. As Muntplein is still under construction Kavka-Center housed the MOS again.

Beside of expiriencing all disciplines you had the chance to see finest Graffiti-Artists working on a huge production and a program of finest rapping, DJing, beatboxing and breakdancing. The original Antwerp-spot – famous “Muntplein” – was and still is under construction. Even though it’s still possible to paint there, it’s just not possible to get a legal permission for a Jam.

So Uncle B.U.G.T has found a new spot at the youth-center Kavka near by. Its a nice yard with a huge wall and smaller walls around. The venue is located very central, has a nice club for an after-party and concert. More than 60 writers from countries all over Europe participating in Kavka and it was good there. More writers showed up than planned. 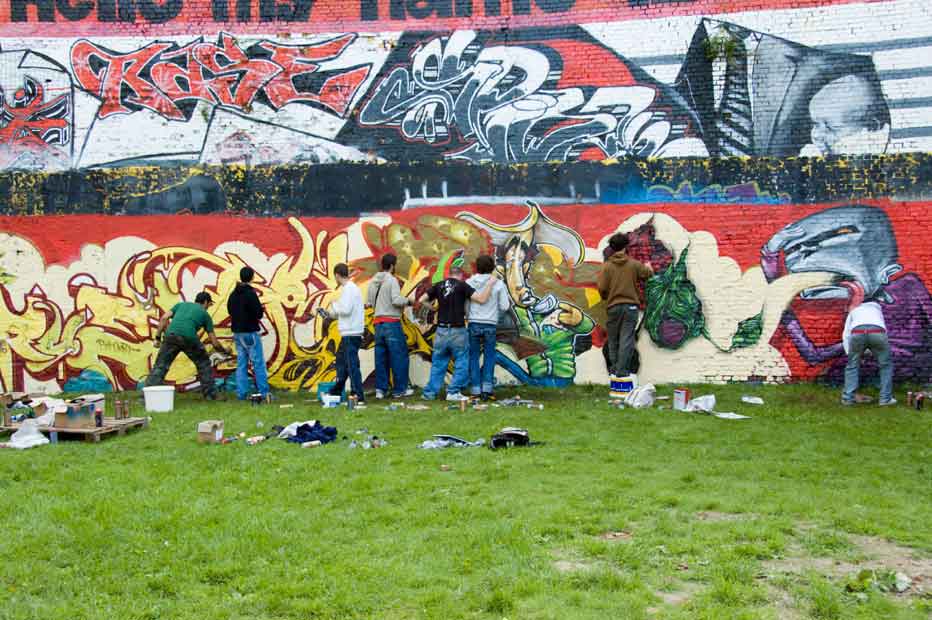 Resm really worked hard to get the painting in order and than he almost had to be kicked out from the center otherwise he had been working through the night. A lot of people been on the big wall: The X-Crew, Petados from Spain, Maria Caktus, Supa, Koes, Jano from Italy, Casroc, Focus, Dome, Rusl, Resm, WOF-Crew from Greece…
Arkis, Waf and Omri from Alosta, TCF-Crew from England, DNYE and Zone., Dfek from Canada and Dex from Ireland, Aerosol Kids, Steas, Bird and Skenda, 3 guys from Florida and more. The theme for 2006 “North meets South meets West meets East” has been chosen because Antwerp has a big harbour where people from all over the world have started their trip over to the new continent.
In past the Red Star Line was one of the shipping companies in Antwerp which brought of a lot of immigrants to New York. Another reason is, because Antwerp-people see themselves as the “centre of the world”.
But the most important reason is that in october 06 was election time for the local government. Presently in Antwerp they have 30% of the people voting for extreme right Chino and Dfek rocked a truck legally in the middel of the street. The local orga. had printed permits from the police to paint at the Muntplein which was used by a ot of painters from the Netherlands. The youth center was completely in the hands of the MOS. A lot of people came to visit the meeting, to see exhibition or to see the presentation of Chino aboutr NYC-Graffiti back in the days.