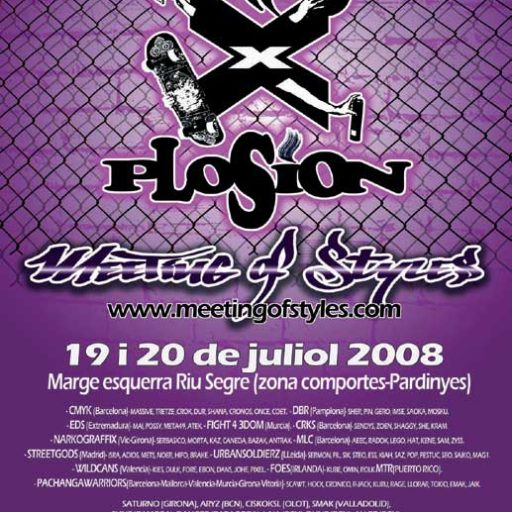 In 2003 the MOS came to the spanish capitol Madrid. Since then Spain was a gap on the map. Now the MOS comes back to Catalonia. Crudel, the Urban Soldiers and a lot of helpers provided the basis to create a huge and special event.

Lleida is a city in the west of Catalonia, Spain. It had 124,709 inhabitants as of 2005, including the attached municipalities of Raïmat and Sucs. It is the central city of the province of the same name. Lleida is the capital city of the comarca county Segrià and the province that takes its name.

Its economy is mostly based on commerce and services, being one of the most important population and economic inland centres in Catalonia. The city is located one hour by car west of Barcelona.It took a litle while for the MOS to come back to Spain. But eventhough it took longer, it came stronger!  It was all set: wall, paint, sun, lifters and a pool to refresh near-by.As the community supported the event, all artists had free entry. Yeah Yeah. The wall is located on the bench of a river, near the city-center on two sides of a bridge, up to 8m high and 2km long.

Its been a really hot weekend. Actually the event started days before with priming of walls and working on concepts. Eventhough the sun was burning all days, artists focussed on their art and shared the lifters. The vibe was pretty chill.During day it was kind of slow-motion cause of the heat, while in the evening it speeded up and got more and more buisy.