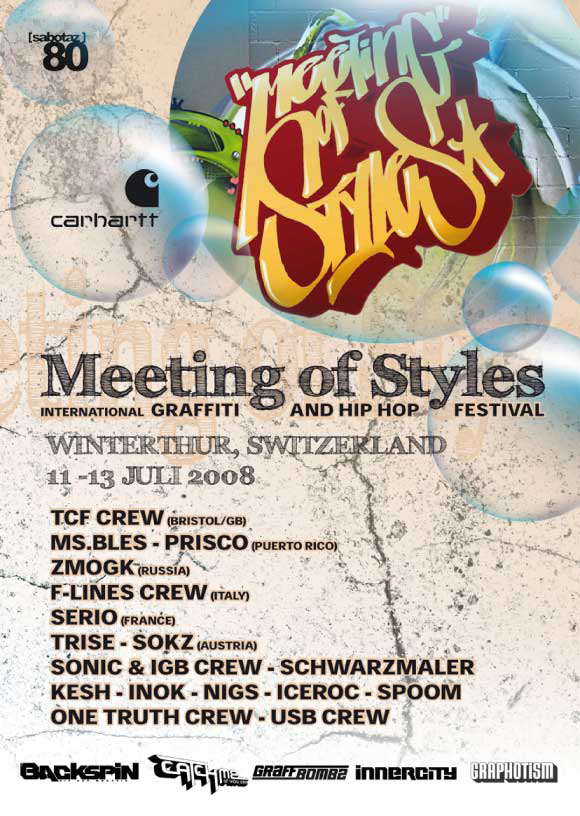 The swiss event is established since 2003 in Winterthur, a city 20km outside Zurich. After the event moved to Zurich in 2007, it came back to where it started back in 2003. The main wall has about 600quaremeters and will be painted with a certain topic in a huge concept.

In the local dialect and by its inhabitants, it is usually abbreviated to Winti. Today Winterthur is a service and high tech industry centre, but many people make use of its proximity to Zurich, which is only 15 minutes by train.Winterthur is connected to Germany and Italy by direct trains and enjoys excellent links to Zurich Airport. It is also a regional transportation hub.

The Station of Winterthur is one of the highest frequent Stations of Switzerland. As most cities are running Anti-Graffiti- campaigns it is not easy to find a good venue. The venue is located next to the youth-center of the city, in an industrial area near s-train-station Grüze. Near ther venue is a second wall that has about 200qm.

Actually it all started weeks before preparing idea, concept, line-up. Sonic, One Truth and the local MOS-Orga have done a lot to continue our swiss edition. The goal was to follow this years Motto “Big Dreamers” so the idea was born to create a big universe with big bubblees as a symbol for individual dreams, in and by different styles.

Its been a lot of work for Sonic and the boys and surely wasnt easy to bring more than 25 artists togehter, following the concept, keeping the line. But eventhough and despite of rain throughout the weekend, it turned out to be a burner. Check the gallery!On the walls: Tcf-Crew (Bristol/GB), Zmogk (Russia), F-Lines-Crew (Italy), Schwarzmaler (CH), Sonic, Syke,Kesh and IGB-Crew (CH), Wany (Italy), Clockwork (Ch), Trise + Sokz (Austria), Kesh, Nigs, Iceroc, Spoom (CH), Serio (France), One Truth-Crew. On the decks thru the weekend… DJ Lil Gee, Dj C-Kret (OTM), m&m DJ Crew, DJ Chillo (Zone 13), DJ Useless (IS), Dj Refstah. After-party was rocked by… Zone 13, IS, Mito(OTM), Italoslang/Zerius, Eloquent, Eniceo and RMU-Crew (Germany)