After the great success of the mexican MOS in 2005, it was a must to come back to the country of unidentified flying objects, pyramids, taccos and tequillas. The place to be: the capitol Mexico-City with more than 23millions people…. its a very exotic and diverse country.

Mexico has a long tradition of mural-painting. The entire capitol is tagged very hard and beside of all the throw-ups, tags and bombings, music bands like El Norte have walls painted with their names all over the city. 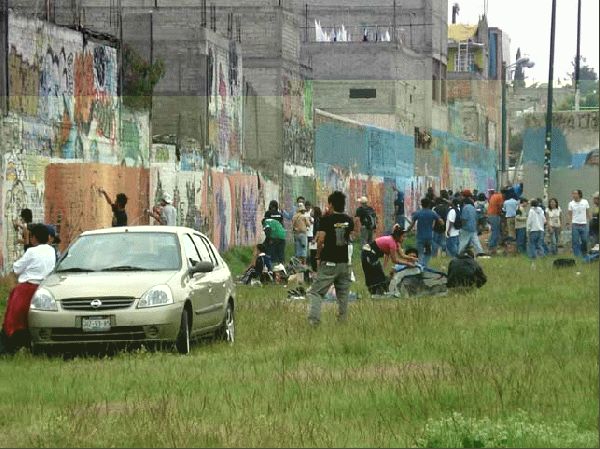 Mexico-City is humoungous, tremendous, endless. You need more than 4 hours to cross it. The jam started smooth eventhough at a new spot – kind of soccer-stadium with a lot of green to chill with many walls around in different sizes. Early in the morning some writers already met to prepare the walls.

Around high-noon most wall space was already taken. Mexican Graf-Scene itself is not so old. Most people are saying that the Graf-movement started in the 90ies. Considering this, its amazing how fast it has developed concerning quantity and quality. Writers came from all over the country. The vibe was like the mentality of the people – very chill, nice and friendly.

The artworks… impressive. Mexico has a very specific flavour in lettering and characters.