After the first impressions of the royal graf-scene at Liverpools Hub back in 2003, the island had become a gap on the MOS-map – for a while. But in 007 we got it going in the Midlands capitol Birmingham.

The UK-Meeting was held just outside of Birmingham city centre, in a town called Dudley. The Hall-Of-Fame has various walls of different sizes around a community centre. 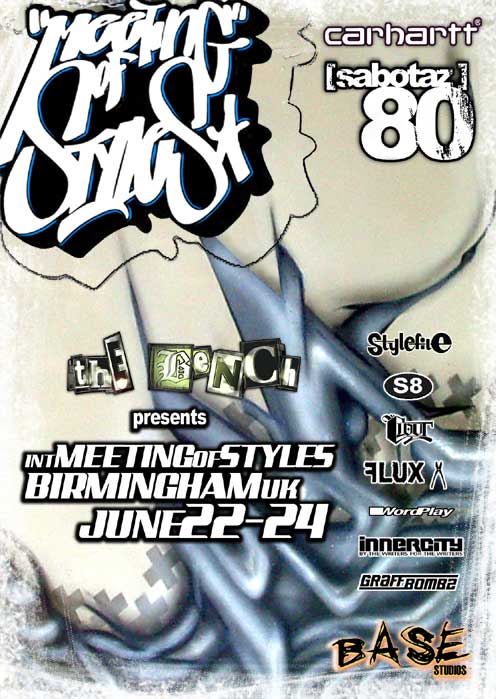 The total walls together made up space for round 30 writers. Additional boards were put up around the outside to make up more space. 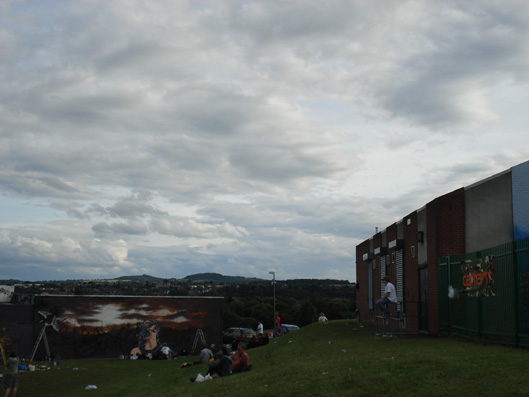 Artists from all over Great Britan already arrived and were ready to rock the surfaces, but they had to wait a little. Later the day, the sun came out, so the crews started to work on their productions. Eventhough Great-Britan has an old and strong Graf-scene, not too much illegal Graf around the trainline in B´ham. May be cause its pretty much observed. Downtown street-cops are equiped with head-cameras. After basic works were done, friday ended up with an afterworkbeer in a chilly pub. So saturday some of the artists started a little later and needed a little longer to get the flow, but they did! Saturday became a sunny day, so the vibe was just right. On a lot of Jams held near the city-centres in the UK, some little street-hustlers hang around to check up paint. But as the spot was a little outside, it happened in a smooth, relaxeda and familiar atmosphere.