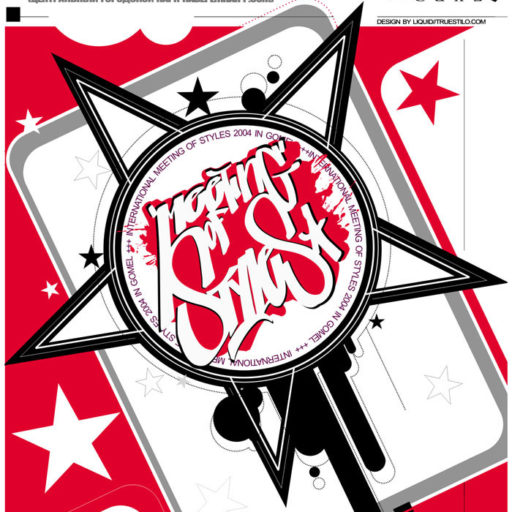 Eventhough Belarus is an obscure country run by europe´s last real dicktator, we were able to realise the jam several times. Due to the restrictive climate of the administration in the capitol, the chosen city was Gomel – an industrial city about 250km north of Tschernobyl.

Gomel is the second biggest city in Belarus. The spot: long and high wall (3m height up to 2 km long) is situated on the bench of the river named Soj in central cultural park of the city near the city-center and close the main train station.

The MOS started at 12.00 on Friday 06th. More than 60 invited artists from several eastern countries were on line up. Belarus is a quite interesting country. You can find signs of the USSR everywhere, shops are quite different to what you are used to from the western world.

In Minsk there is a special department that takes care about the streets and houses, so you dont get to see much dirt or tags on the street. But nevertheless the scene over there is quite active and does nice productions in a quality you´d never expect. The vibe during the Meeting was quite intimate, relaxed and smooth. Around 100 artists have shown up to leave their skills.

The inhabitants of Gomel enjoyed the MOS as a very special unique sightseeing attraction so families with children, older peeps and a lot couples came along – around 2000 have passed by the event. An After-Party was held in one of the many underground-clubs in Gomel presenting russian skills of Rap and Djing.