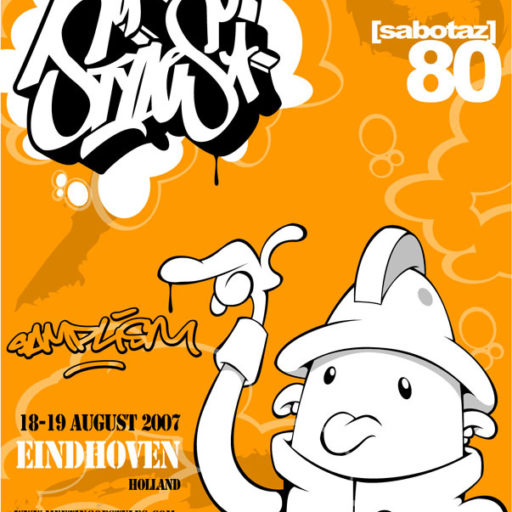 You know that the Netherlands have a long and old history of Graffiti since the late 70ies. So we are glad to present you some of the tuffest Graf-Writers from Holland and those who are strongly related with the dutch Graf-scene.

Eindhoven is a municipality and a city located in the province of Noord-Brabant in the south of the Netherlands, originally at the confluence of the Dommel and Gender brooks.

As you can see the spot is pretty nice. Lots of green around to chill and to relax, many walls all over and located pretty central. Location: The Berenkuil (Insulindeplein) in Eindhoven.

At Eindhoven Central-Station take the northern exit to the bus-stops. Walk towards the big RABOBANK building and go to the right. You’re now on the Prof. Dr. Dorgelolaan. After 1.5 km you enter the location of the Meeting.

By car from Dusseldorf…Take highway A44 towards Monchengladbach. Direction exit 27 Nimwegen/Krefelt. At Krefelt take A57/E31. Than take A40/E34 towards Venlo… Entry into the Netherlands. Take A67 towards Eindhoven.

At Eindhoven take exit 33 to centrum. You’re now on the road called Leenderweg. After 1.5km take a right turn on street Piuslaan. Go straight ahead till you see the railway. Take the road underneath the railway and after 200 meters there’s the location … same location as in 006.