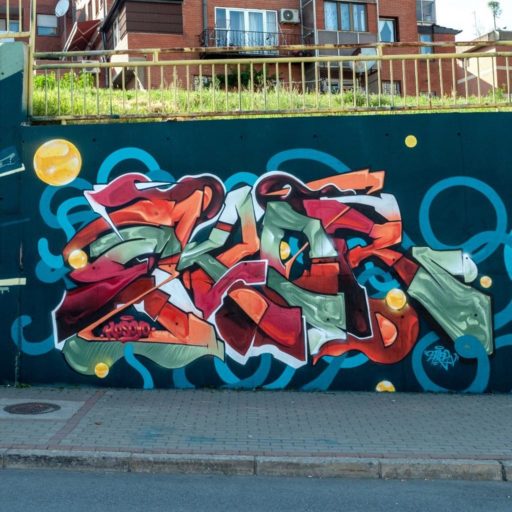 Hi Eklor! Introduce yourself – how did you come to be an artist?

I’m Eklor, frenchy by roots, world citizen by heart. I live in Amsterdam since 7 years, been painting on walls since 2004, drawing letters on paper since 2000. I came to graffiti from the hip-hop movement, and started a bit later on walls because I was living in Senegal between my 14th to 18th so there I had no access to sprays cans back then. I met some true friends on my journey with graffiti and that’s a part of what has motivated me all these years to keep going, and nowadays be a part time artist.

Tell us about your style and use of color. What does Graffiti and painting mean to you?

I don’t think I have a specific style, it’s rather set in a general wildstyle trend from around the 2010. I like to try some experimentations with textures, but lately I came back to a more simple use of colors. Although I like to have a wide range of contrast in all my pieces.

Why did you join the Meeting Of Styles and how would you describe it?

In the late 00’s I was part of the LCG crew and that was our golden age if I may say. We were organising several graffiti jams each years with local and not so local friends, and it was a lot of fun. I always enjoyed big walls projects, despite all the mess in organisation they often brought. For me the moments with friends are as much important as the painting itself, graffiti is a lifestyle and jams or festivals are bits you really want to cherish to enjoy at fullest. So naturally the concept of Meeting of Styles got my attention. Specially to widen my horizons of friendship and knowledge in the world wide graffiti scene.

What inspires you and who are your biggest influences?

It’s hard to say at the moment (Corona crisis), since I think a lack a lot of inspiration, or let’s say motivation more. But usually it comes from the scene itself, fellow graffiti vibes I enjoy and follow, stick in your mind and just come back unconsciously in your my creations. My job as graphic/motion designer also plays a big role in my inspiration in termes of placement of colours and light I believe.

I could say that my favourite location at the moment is the NDSM spot in Amsterdam for many reasons, one of the main is the soon to open gigantic Urban Art Museum in the warehouse. But sadly, my friend Peter Ernst Coolen the curator that dedicated 5 years to build this amazing project, gathered over 250 big sized artworks from artists over the whole globe, just got kicked out by the owner of the building for no reasons… I think it’s worth mentioning because maybe he will need support from the community to win a lawyer battle now…

What would be your dream location/collaboration/project?

I’m looking forward to do a big mural project, could be anywhere I don’t really care, and in collab also, but I think this is the (still vague) next step I want to achieve.

How do you see the rise of street art and new tendencies like big scale muralismo?

Well the previous answer says a lot already. I think it’s a good thing, and as long as it’s not stepping over the underground scene too much, I believe both can cohabit quite well.

Are there aspects you dislike about Graffiti?

To join with the previous question again, I think what I dislike in Graffiti, as much as in Life strictly, is the extremists. The urban art scene has developed in a very complex and diverse way in the last decades and I find the rivalries often being childish and sterile. But also the new generation of kids or people that don’t try to understand the movements and or unspoken rules before to act and do stuff. The lack of knowledge, and the lack of respect that goes often in pair with it.

And now tell us what you love about Graffiti.

The lifestyle, the big family driven by the same passion, the sharing and caring. I experienced an unprecedented welcoming in the Southeast Asian graffiti scene for example. So far on the other side of the world, yet I felt like home because of our shared passion.

If you could compare your style with music, what would it sound like?

Interesting thought… Maybe somewhere between dubstep and Lo-Fi… it’s like a huge spread but I find myself creating with very different music styles. I think sketching my letters goes very high bpm and setting my colours on way more chilled out tempo :).

What is the most annoying or worrying thing of the present time for you?

Haha… obviously the Corona issue! won’t be able to go in Spraycations…

Tell us something about your artwork and about your creative process.

I have a more recent passion in life and that’s video/motion and graphic design. Therefore, I like to explore how I can combine it with graffiti. I make little animations of my pieces for insta posts but also after movies of my travels and graffiti events. It’s an interesting path and I hope I’ll find a lot of fun on that one too.

Finally, show us some more of your work!