NYC is a “tuff” place when it comes to Graffiti. The city has been bombed hard since years, so no question about the fact that the city of New York is running a strict Anti-Graffiti-campaign since years. No doubt that it is not easy to do a Jam in the Big Apple. But even though we could realised it three times and also managed it to do it for a fourth time.

New York City – the mecca, the place where Graf started its long journey across the planet. In these days things over there aint that easy anymore. The city of NY is doing a lot to keep Graf down. But even though they try hard, Graffiti can’t be faded! And the MOS succeeded. Col of the “Robots Will Kill Crew” and King Cope had done a lot to make sure that the Meeting Of Styles NYC continous to be a dope event. And indeed it was.

More walls, more space, more writers was the goal in 2006. The target: several walls among two blocks in the South Bronx. By friday night the FX-crew was buisy priming the wall so they were ready to burn at saturday. Early in the morning many writers were already busy working on their pieces. The “156-boys” from Montreal came all the way to rock the show as well as many writers from NYC, Boston, Europe and a couple of female writers came too. 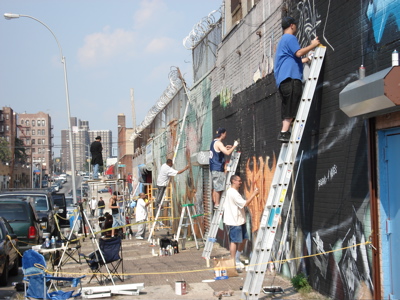 Lots of people came along, to chill, to paint. “FX ” was busy rocking a huge wall with a dope jungle concept. All day long people were painting, chatting, chilling. If you hear Bronx you might think – Ghetto. It still is kind of like that, even though a lot had been done to make it better. But the vibe at the jam was not Ghetto at all.

There was a chilly and very constructive atmosphere. Writers were busy until late at night – a time at which you are usually not supposed to hang around in the Bronx anymore. Sunday was the day to finish the pieces and concepts and so it was done. This year no problems occured with the “vandal squad”. Some regular cops came along, curious to know why so many writers were hanging around there. So they asked for the permission, but no problem. Cope was prepared. Check out the results! The Spot is at: East 173rd st./Westfarm Road Bronx