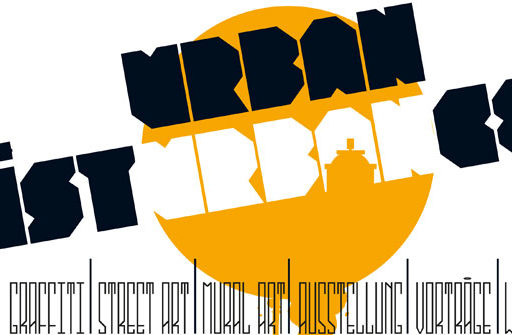 The Schlachthof Wiesbaden as the birthplace of “Int. Meeting Of Styles “enjoys global awareness. By the foundation of the “Int. Wall Street Meeting” back in 1997 a festival was born which throughout the years promoted hundreds of graffiti artists and reached thousands of interested visitors.

“Urban Disturbance” will build upon on this tradition and document the evolution of Graffiti as a part of Urban Arts with wide range from the fields of Graffiti, Street and Mural-Art.

Graffiti, Spray-Can, Mural and Street-Art are a major part of urban cultures and in the past decade have made their way into galleries, museums, advertising- and fashion-industry and are thus an integral part of the cultural and economic life.

“Urban Disturbance” wants to support the creative potential of the urban art scene. Its main intention is to create a forum for the international art-community to exchange and to assemble techniques, styles and skills and by cross-border cooperation encourage and strengthen the international exchange.

As the birthplace of the “Int. Meeting Of Styles”-Festival the Schlachthof-area and the city of Wiesbaden enjoy global reputation. This festival was founded here in 1997 and after the demolition of Europe´s largest Graffiti-Gallery in 2002, conquered the world and since then realised over 150 events worldwide promoting hundreds of graffiti artists and reaching thousands of interested people all over the world.

Due to its reputation and in regard to a convention of Urban Arts the Schlachthof Wiesbaden as the birthplace of the “Int. Meeting Of Styles” has a high significance with an interesting potential.

The history of the area and the planned creation of the Cultural-Park offer the unique opportunity to establish an event of international significance with a high social-cultural impact. The convent, the artists and the created artwork contribute substantially to the development of the area, underline and vitalize the park´s meaning as a meeting place of urban scenes and cultures.

Over a weekend invited artists together with artists of the city and region will develop concepts and then create large-scale murals and street-paintings. Different workshops will offer young people of the city to expirience different design elements. Besides Drawing, Graffiti and Breakdance-Workshops a sculpture workshop will be offered. Lectures by invited representatives of various institutions and associations as well as a symposium will promote exchanges and dialogue at institutional level.

Beside the reputation and history of the area the “UrbanDisturbance” considers changes and developments within the urban art scene and therefore shall present different styles of expression.

Graffiti in Bochum
In 1999 Writers demanded legal wall-space from the department of youth of the city of Bochum. Since 2001 it became possible to paint legally any time on approx 20 walls around the city without application or special permission. What happens on these wals, how do the open-air-galleries and public studios develop. Report of expiriences in Bochum by Jürgen Kottbusch

Adding New life to an abandonned industrial area and giving the opportunity to a negatively recognised artform to express and to present, gaining access to all interested levels of society to see, feel andenjoy Graffiti- and Street-Art at one spot. This and more are the main aims of the country-wide active association Freiluft-Atelier e.V. and its Aerosol-Arena in Magdeburg Rothensee. Presentation by Daniela Kreissl und Jens Märker

The event and the program will connect various social-cultural aspects. The exchange among artists at the international level, young people have the opportunity to participate at the potential of these artists and to learn in workshops and to discover and deepen their own talents. In addition, young people in exchange with artists from abroad expand and strengthen their intercultural skills. The festival offers publics and creative professionals the opportunity to discover latest trends and developments of the urban art scene.

The art created will change the appearance of the Cultural-Park creatively and sustainable. In form of large-and small-scale Mural-Art, pieces of Street-Art the Cultural-Park will finally receive a face and come into sight.