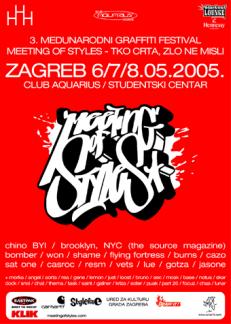 Croatian HipHop and graffitiscene has always been very vivid and diverse. Our local organisation was able to organise the jams on different spots throughout the years.

In 2005 the Student Centar was the place to be, nice walls, nice gras, chilly vibe and a funky trainline next to it. Zagreb is a dope city and Croatia a dope country! The scene down there is pretty vivid, cooperative and simply nice nice nice. Beside of the Rap-scene there are lots of dope writers and mad bombers. The girlies down there are just… wow! The MOS is the first Hip-Hop-Graffiti-Jam that is being held in yugoslavian countries since mid 90´ies and is now the major event in Croatia, Serbia, Bosnia. Arrival friday evening by plane. Crone YCP was right in time and gave us a ride to the place where we stayed. After eating some mad, dope pig, we were ready to take of to the number one place in Zagreb, when it comes to choogie-boogie – the Aquarius-Club. Mad mad mad, folks.

After this choogie-boogie party, we went home to sleep to be ready early the next morning for the real Jam. Opened our eyes, we realised this would become a great day. Sun all over the faces, lightning up the deepness of our souls.

We got to the spot and realised, some of the heads already got buisy. Around 60 Graffiti-artists from Croatia, Serbia, Bosnia and Europe have showed up. Around 2 in the afternoon, the spot was already filled with spectators, artists and activists while heavy Hip-Hop-sounds were waving among the area. Pretty funky that the stage was right in front of some train tracks, so painted trains were passing by and caused this funky vibe. Later the day, a one-on-one-freestyle-rap-conest had been held. It was great, to see these cads like Caspar, J-Lee rapping. Remi, the best female MC in Croatia, of Elemental was the battle-host. The crowd was the judge and they really liked it! After the rap-battle, the stage was entered by well- known n famous “Feel The Panic ” Breakers. These guys were spinning and rocking like hell. Later the evening original Chino, the Graf-page-editor from the Source-Mag, held a slide-show about oldschool NYC-graf with unseen and unreleased material. The day was closed with another funky fresh party right at the MOS-venue.