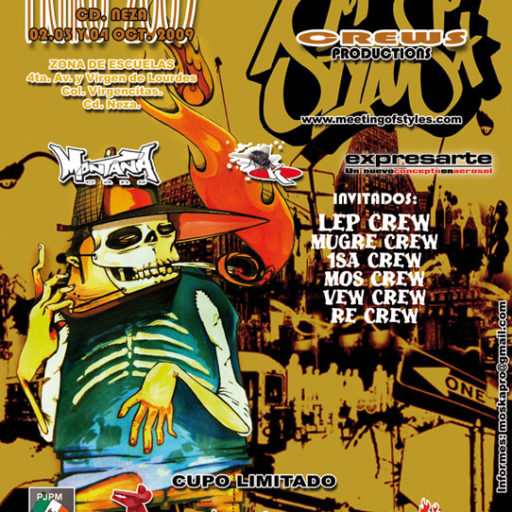 Coming up another MOS you shouldn´t miss. As always the mexican Orga will present you a crazy spot with lots of mexican and latin-american artistas.

Mexico City is the capital of Mexico, its economic, industrial, and cultural center in the country, and the most populous city, with about 8,836,045 inhabitants in 2008. Greater Mexico City incorporates 88 adjacent municipalitie and has a population exceeding 19 million people, making it third largest agglomeration in the world.

Mexico is wellknown and famous for its Writing- and Graffiti-scene, very vibrant with a large variety of styles, writers, crews and artists. Throw-ups, Tags, Quicks everywhere – outside the city-center hardly no unmarked wall to be found. The scene is strong and on a very high-level. The place to be in 09: the funky district of Nezahualcoyotl.

The walls are located next to the regional art-center, partly on a buisy main street and contain lots of space for plenty of artistas. These long walls in a nice format give space for nice and rocking productions. Be prepared!