Once again the MOS came back to the country of Wilhelm Tell, secret bank-accounts and Blumengebinde, the swiss edition of the MOS happened again in Winterthur.

Beside of walls, raps and vibes a good tea could be expect which indeed was served. The main wall is not as big as the Alps, but still is kind of huge. Approx 300m long, 4m high the baby offered space for more or less 30 artists. The spot is located in an industrial area near the station Grüze.

A youth-center next to the wall was the basis of the operation. Outside-party was scheduled as well as an inside-party and a Barbeque. The main-concept for the 2006-wall was done by TCF-Crew from England and TDM-Crew from France. First artists arrived on wednesday before the event to prime the wall and to prepare the humoungous concept. 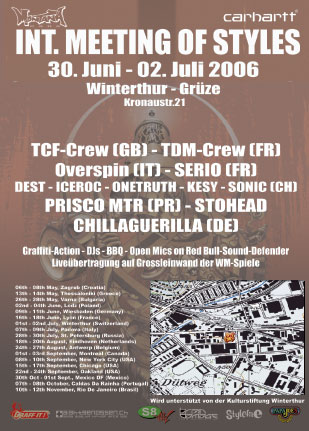 The Jam happened in this well-known chilly Switzerland-vibe, tea, beer, barbeque and reaggae-sounds. More than 40 artists showed up to be part of a djungle-concept prepared by TDM. The weather as well as the girlies were nice nice, the wall turned out to be a real burner.