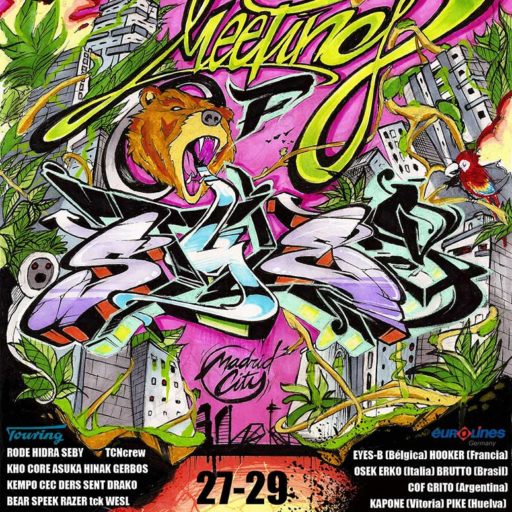 MOS returns to the city where the spanish Meeting took place for the first time back in 2003. Spanish Graffiti is very strong and vibrant as MOS presented in Lleida back in 2008 and 2009. Now after several years absence Spain is getting back on the map! Madrid is the capital of Spain and its largest city with a population of roughly 3.3 million and 6.5 million in the metropolitan area. As the capital city of Spain, seat of government, and residence of the Spanish monarch, Madrid is also the political, economic and cultural centre of Spain. The Madrid urban agglomeration has the third-largest GDP in the European Union and its influences in politics, education, entertainment, environment, media, fashion, science, culture, and the arts all contribute to its status as one of the world’s major global cities. Due to its economic output, high standard of living, and market size, Madrid is considered the major financial centre of Southern Europe. Supported by:

Graffiti in Spain is strong since many years, the train systems are painted since decades on frequent basis, the trainlines and freeways are full with coloured pieces, tuff styles and rough characters. The place to be is the famous Metropolitano Wall at the university of Madrid with a length of 130m and between 2.20 and 3.50m high. Universidad Complutense de Madrid, Avenida de Maeztu, 28040 Madrid For any inquiry or participation get in touch with mos_madridcity@hotmail.com