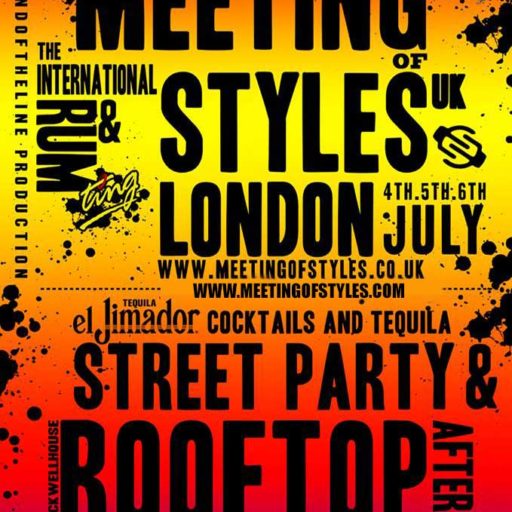 Meeting of Styles returns to the UK for its eighth year and its fifth year in London. Many walls will be painted, beers will be drunk and good times will be had. Three days of painting and hip hop in the heart of Shoreditch.

The city has become one of the most popular tourist destinations in the world, and its popularity has increased over the years due to economic growth in the past. Since the financial crisis its considered as a home base of corrupt elites and major source of manipulation. London’s diverse population draws from a wide range of peoples, cultures, and religions, and over 300 languages are spoken within the city.

This year EndoftheLine haw created something truly different. We don’t want to give anything away. The location is a secret until the Thursday before the event when we will release the information. Rockwell House have kindly donated their incredible rooftop for the duration of the festival. There will also be children’s workshops throughout the weekend. From 6 o’clock it will be transformed into a boozy graffito paradiso. This year we have secured incredible sponsorship from El Jimador, Ting and Eskis. Our good friends THTC are supporting us with t-shirts.

Artist list is nearing completion. Stay tuned for the full lineup. Unfortunately we can’t accept any more submissions as wall space is tight. If you are there during the weekend you may get on the wall if there are last minute dropouts. Collaborators – Streetclash, Super Scratch Sundays, Beatbox Collective, End of the Weak, HumanBeatbox.com

03 July 2014, MOS-Opening-Party
Rockwell House host their First Thursday Live Painting Party in union with Meeting Of Styles. Come down and witness something truly unique under the canopy of our Tented Rooftop. We will have food and drink available. Rockwell House, 10-14 Hewett Street, EC2A 3NN London, United Kingdom