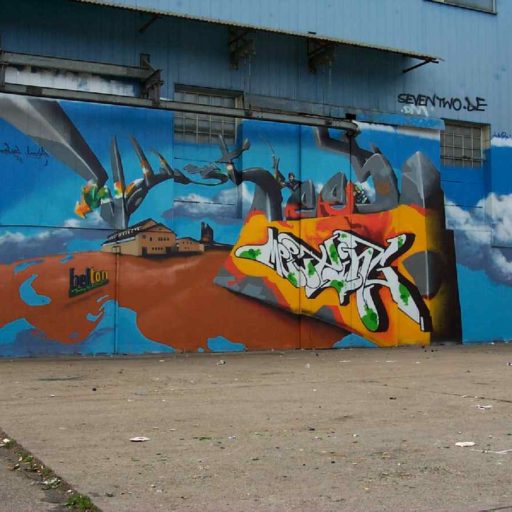 After the destruction of the Meeting´s birthplace, the worldwide known Schlachthof in Wiesbaden, we are glad that the option came up to create a large monument to remember the legendary jams.

The creation of the monument is part of another legendary festival. Eventhough we tried hard to maintain the area, in 2002 the city started to demolish the halls and walls.

By then a movement had started which demanded the dedication of the area for youth-culture and activities and led to the creation of the cultural-park. In late 2010 the cultural association of the Schlachthof realised that the roof of the main building was not solid anymore. Within a short deiscussion in the city-council, the decision was made that Wiesbaden will get a new cultural center build.

By then the idea came up to paint the backside of the building with a large-scale monument to remember the glory days. Here the Meeting was founded and from here it conquered the world. During this weekend 15 selected artists with a worldwide repuation will turn the 300squaremeters large surface into a huge piece of art!

Kontext Wiesbaden will have an area with Appelwine-Bar and a nice stage-program.