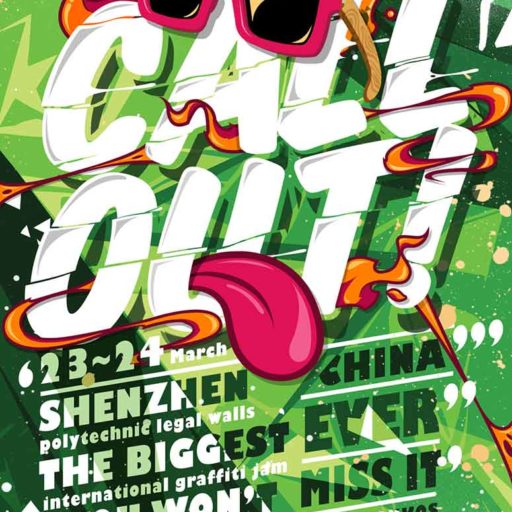 We are happy to return to the awakening giant China. After a smaller MOS-Session last year our chinese Orga now comes up with various plans, lots of space and a vital program.

Shēnzhèn is a major city in the south of China’s Guangdong Province, situated immediately north of Hong Kong with a population of roughly ten million. The area became China’s first—and one of the most successful—Special Economic Zones (SEZs). 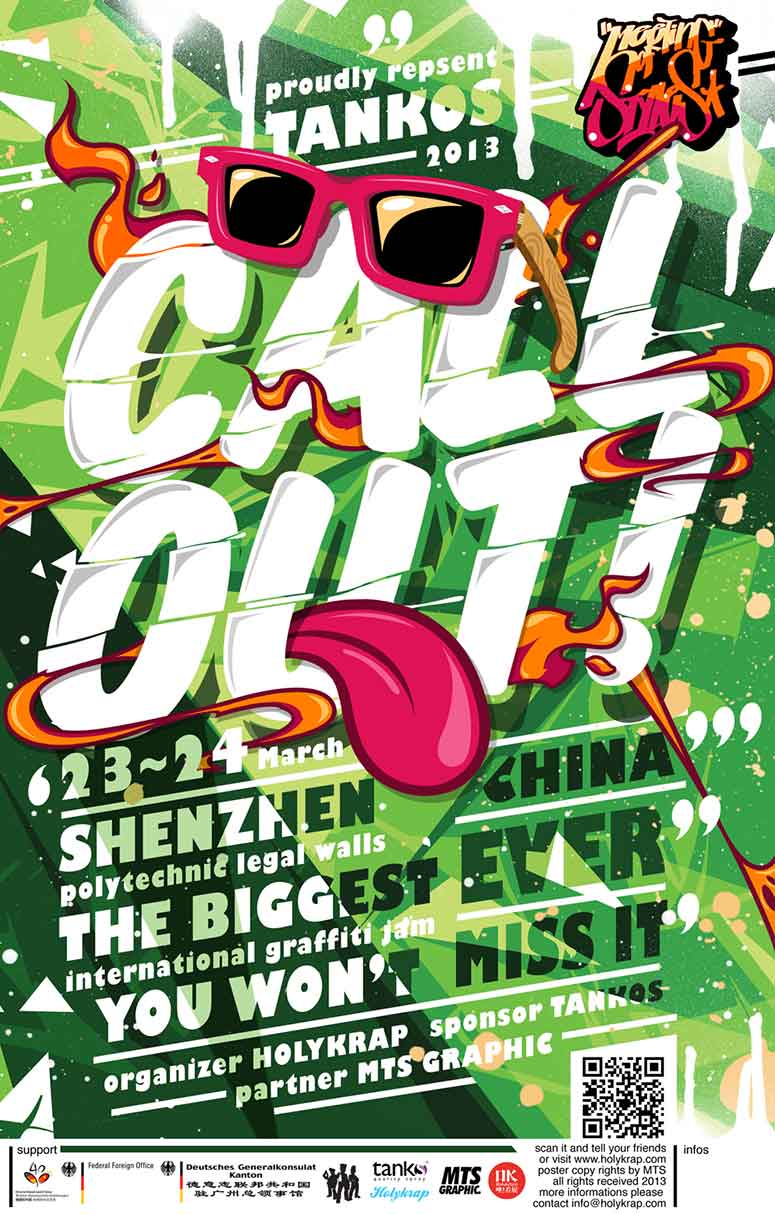 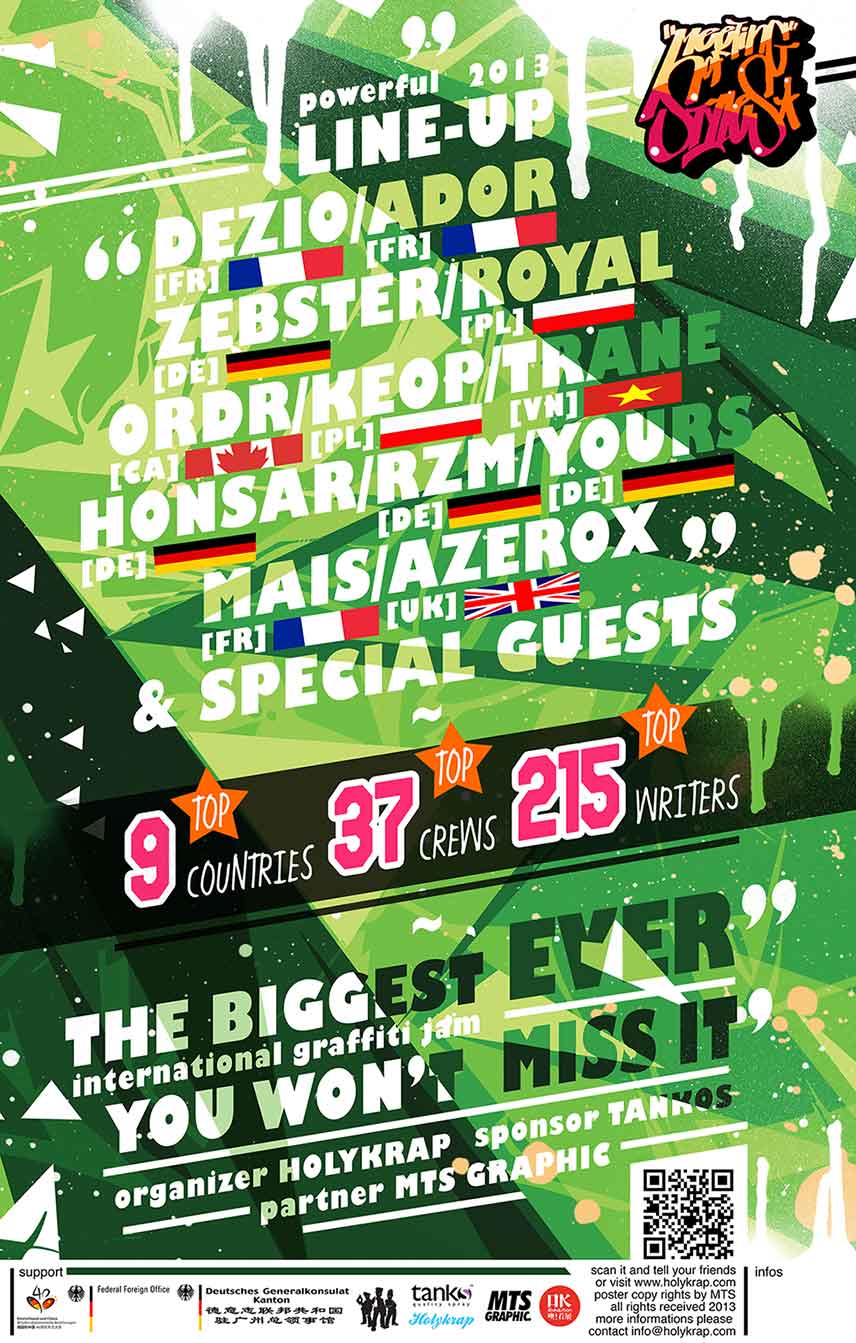 After a saller MOS-Session in Guangzhou in 2012 everything was set for MOS to come back in full effect!

China has a documented history of graffiti for about 10 years now. The population of graffiti writers has been growing ever since. It’s not only a way of showing their vigorousness and creativity but also their life attitude and passion. As a germinating form of art, many citizens are not so familiar with graffiti and consider street art as vandalism, but efforts never stop to bring livelihood to the street.

Chinese writers had their own graffiti jam nation tour since 2008 (Action For Seed) and had one issue of magazine in 2010, but chinese graffiti hasn’t been greatly recognized in the world. When Meeting of Styles came to Changsha in 2011, it was the debut of this international event in China. More than 150 writers covered a mile of dam. This year, Meeting of Styles Shenzhen, organized by Holykrap, had more than 200 writers registered through the online system. Though the event was only for two days, the proposing and preparation lasted for a few months.

It was finally settled to take place in the new campus of Shenzhen Polytechnic on March 23 and 24. The weather was warm and humid. All the participants were randomly assigned into 12 groups each with more than 200 square meters wall. After each getting a pack of six single-random-color cans for free sponsored by Tankos, group mates started to discuss over a common theme and color scheme. Many novices were benefiting from seasoned writers in the team, being able to collaborating with them closely. On the ground were people skateboarding, riding fixed-gears and playing basketball. Magazines, accessories and cans were supplied.

Later, after we took a link-up photo for all the participants, Food Burner Eating Competition heated it up the afternoon. Starving writers gobbled 12-inch subway to be first to finish two in order to win the grand prize of 10 packs of cans and more! After it got dark outside, we took part in a workshop. It started with an interactive panel discussion with 3 non-Chinese writers including the founder of MOS, Manuel and 6 Chinese writers including one lady. They introduced themselves and shared the most fascinating thing about graffiti to them. When asked about conflicts of graffiti and art, Manuel insisted that graffiti is art, the love of beauty and a form to conveying messages. Then, one of the pioneer writers, Zestie, made a review of the 10 years of graffiti in China. A final remark was given by the chief organizer, Touch.

The next day, when some people stayed to finish up their piece, many chose to expand the territory to some of the popular spots in the city such as Ikea and Honghu-Lake HOF area. The extremely short and memorable two days were wrapped up in an after party.The curtain wasn’t really dropped. Two writers got caught decorating an old truck and were kept in the police office for a night. Well, they rock and that’s the spirit! It was mostly pleasing that we covered longer walls and showed higher quality overall. Though there were some plans not carried out due to lack of hands, we all feel optimistic about future events. Chinese writers may have different lifestyle and ideology, but they are as talented and enthusiastic about graffiti as writers from any other country. We look forward to more international exchange and more Chinese writers can travel and show their work to the world. The reestablishment of Holykrap.com would also serve as a catalyst for the development of Chinese graffiti.

Driven by passion and engagement Touch of Holykrap and his partners of MTS Graphic have arranged a great spot and an impressive line-up of artists. Including guests from Europe, Canada and Vietnam around 200 artists from all over China are scheduled to rock!