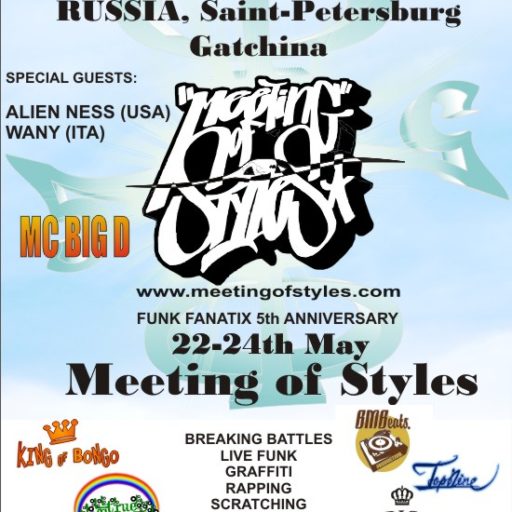 Meeting of Styles Russia 2009 takes place in Gatchina, a small city located 40 km to the South-West from St. Petersburg. The walls of a ruined factory are forming the venue of MOS Russia 2009.

«MEETING OF STYLES RUSSIA 2009» starts in Gatchina. It will take place on ruins of former concentration camp where tens of thousands were burned alive during World War II. Influencing the vibration of visible range graffiti’s supposed to paint the pages of history with positive colours. It will last until the spot is closed and graff-artists masterpieces remain only in annals of photo- and video-documentaries. Spot is open for public 23-24th May.

This year applications for participation at MOS will be available only for crews. A Crew must consist at least of 3 writers. E-mail for crew applications: mos@funkfanatix.com

And of course, FUNK FANATIX AFTERPARTY in club “FOUR”! Only the funkiest stays alive. Afterparty starts with delicious supper for bboys. Please, remember, Funk Fanatix care not only about you hearts but stomachs as well.

24 May «BREAKS on the BREAKS ANNIVERSARY BATTLES»

Each participant going through his nominee and score for his crew. Crew gathered the biggest score in total wins the competition. Spinning wheels Dj SMIRNOFF (Syndicate)