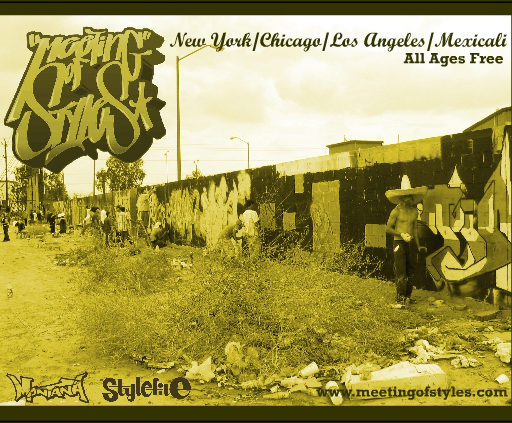 The MOS came to Mexicali in 2004, a city north of the country near california and the US-Boarder – first time in Mexico. No doubt that this city is mostly about guns, prostitution, drugs and how to sneak into the US. Mexicali is also known for another huge Graffiti-Event called “Graf-Con”.

Early in the morning, we got ready to hit the spot. As we got there, already about 30 writers were on the set. We primed the wall and started to work on our production – cans with our names on.
It already was hot before high-noon, so we headed to a grocery to get some cold liquids. As we got back, some stress was on the scene. A noise – bam bam bam – so we thought: Damned who is shooting? ”Writers were in pressure and as we came close, we checked what the happened.

Obviously the owner of the wall and the spot didnt tell his security-guards about what happened on this day. So the boys in the yard were throwing stones against the metal-gate. Once you heard that, you can imagine what it sounds like. After a phone-call and a talk with the landlord, this problem was solved and everybody got back to work. The sun was burning and it was not easy to fullfill the plan.

The place was not this kind of place where you just lay down to get a sunteint. But eventhough people came along to watch, to chill, to meet and to have a good time.

Some kids ran around the neighborhood bombing and tagging. A mad landlord came by, complaining about his “beautiful” white wall that has been bombed hard. We agreed to get buff-paint and clean it up. First it was cool with him, but after he called the police. Didnt take long and the cops hit the scene. They were about to arrest everybody and told the local-organiser: “You pay hundred dollars and everything is fine. If you dont pay, we arrest everybody and each of you has to pay a hundred. So think about it! ”It didnt take long to make the right decision, so money had to be collected to for the “buy-out-of-prison”-fee. Due to this circumstances writers who came from the West-coast to rock the walls were not guided to the walls to avoid additonal troubles with the mad cops. Desperado country!