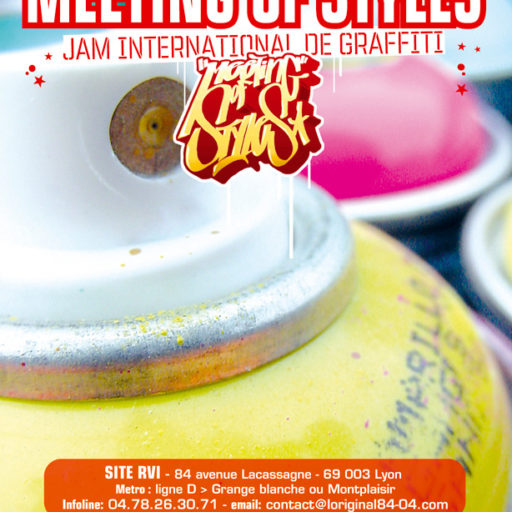 It was the first time the Meeting came to Lyon, to a perfect spot similar to Wiesbadens old Schlachthof. The RVI-factory near Grange Blanch is housing thousands of squaremeters of walls and is a melting-pot of the local urban art-scene.

The french MOS was happening in close cooperation with the 20th anniversary of Hip-Hop in France – L´Original (www.Loriginal84-04.com) at an industrial area at avenue Lacassagne in Lyon, close to the subwaystation Grange Blanche. The area is enormous and reminds a bit of the old Schlachthof in Wiesbaden.

Huge halls that have been used as a van-factory in the past, now used by all different kinds of artists. About 200 writers (too many tomention them all) from all over Europe came to make the opening of MOS 2004 very special.

The vibe was very relaxed, smooth as well as the artworks being done on this weekend. Total wallspace approx more than 2000 squaremeters.