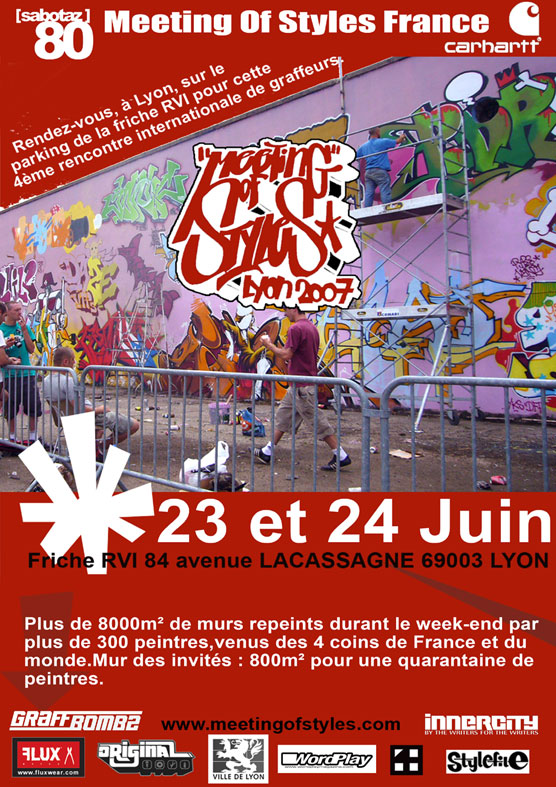 Sometimes you need to be flexible, so do we. Due to permission matters we had to change the date of the french MOS to the 22-24 June. The place to be is very well reachable near the station Grange Blange in Rue Lacassagne. The amount of walls is humongous.

The weekend has been colourfull and fresh. Lyon (formerly named Lugdunum, Lyons, is a city in east central France with a strong, colourfull, stylish scene of Graffiti-Artists, -writers and muralists. The place to be: a melting-point of different urban forms of culture – the RVI-Factory.

It is the third largest city in France, situated between Paris and Marseille it has a reputation as the French capital of gastronomy and a significant role in the history of cinema. Together with its suburbs and satellite towns, Lyon forms the second largest metropolitan area in France after Paris, with 1,648,216 inhabitants at the 1999 census, It is approximately the 20th to 25th largest metropolitan area of Western Europe.

RVI used to be a factory for trucks in the past. Since its not in use anymore due to globalisation probably, the local art and cultural-scene has discovered it and is using it. The spot has several thousand squaremeters of walls in different sizes and lengths.  Early in the morning writers from all over France arrived, caught cans and space to become part in Graffiti-Heaven which was also the main topic – heaven and clouds in the background, styles and characters fitting in.

The local orga always puts a lot of passion and dedication in it, so no doubt that the vibe was very chilled. The entire weekend more than 100 artists from all over France and Europe worked out a new outlook of the Graffiti-Gallery at RVI.

As in France a very strong Vandal-Squad is still buisy, a concrete line-up had not been published. Eventhough you got to see writers and crews from all over France over to Switzerland, Spain, Germany and far beyond.