After the great expirience of bringing Chitown´s major Graf-Crews together, the MOS returned to the windy city of Al Capone at the great lake. 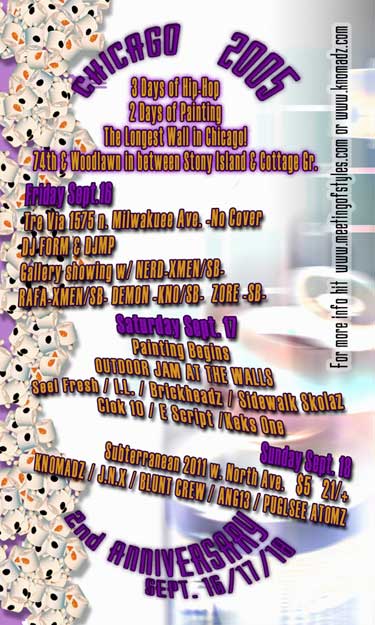 The original spot was the longest graf-wall of the city. Was. It’s interesting how similar things can be, sometimes. If there wasn´t so much love, passion and engagement involved, some desk-operators had caused the cancellation. We are glad that we could count on SB-Crew and the Chicago Graf-scene´s support, so the Jam happened to be in Little Village, at walls around 3600 S. Albany and Kedzie. In Belarus war-veterans and communists were against the jam close to their housing-project, in Chitown some officials feared thousands of visitors and graf-writers in the hood. This time the problem was not caused by the police (indeed were supportive about the event), the problem was caused by official representatives.

You got to know that Chicago-City is runinng a very strict anti-graffiti-campaign. The city buffs illegal pieces very fast, but also legal stuff which had been done with a permission of the owner. The event started friday night with an Art-Show of some of Chicago’s best Graf-artists at a gallery featuring Old-School-King Zore, Rafa, Nerd and more. The Jam started saturday high-noon priming walls, talking about concepts.
Soon writers were active on several walls as the painting-action was spread over a couple of blocks in Chicago’s Little Village.Some walls have been around an industrial area, some near housing-areas. It’s been approx 10 walls in a nice size that were done on the week-end.Chicago-scene is very cooperative and open-minded people. Around afternoon Red Bull came along with sound-system and energy, the local scene and the MOS expressed its total vibe.

Chicago-Underground gave a presentation of Chicago-Hip-Hop. DJs were rocking and gave the whole event a smooth aura. One show after the other, crowned with a freestyle-session by great talents. Old school writers who write since more than 20 years came over and got active as well as new school writers. Barbeque had been done some blocks away from the main set and everything was chill.

The writing and rapping scene there is very well connected and all people come along with each other very well due to respect and appreciation, but: there is always somebody to cause trouble. Why? Cause the Latin Kings have put their sign on it, showing and representing their neighborhood. The writers who painted next to this wall, told everybody who was about to start painting on that wall, not to do it.

All of them respected. But just one guy was about to fuck up the whole event and almost caused serious troubles. In the evening when it was about to become dark he just crossed the signs of the LK’s by purpose. These Kings aint play around. Ready with bats, they chased the guy and run by the main wall. Zore who knows just told everybody to leave, “The jam is over, get out of here”. After this short period of stress, everything calmed down and the LK apologized for the stress as they support the event, the local scene and let them paint the walls in their hood since years… all about respect! Sunday everything was chill. Writers came along in a more realxed atmosphere to finish walls or just to hang around.

Sunday night a great week-end had been closed with a party at Subterrenean featuring some of Chicago’s dopest and greatest rappers and crew such as The Blunt Crew, Jinx, Elementals, Ang13 and the Knomadz.The MOS was an absolut atuhentical jam.

Being there, you could feel the love the people have in thier heart, celebrating and living true Hip-Hop-Culture. It was a great expirience and one of the best jams to be.Big respect: We love Chicago Hip-Hop. Some crews representing the dope Chicago-style: CYA, CMW, MUL, XMEN, CMK, ELOTES and co., SB, ABC, CISA, Enimy and co., Kuaze and the East Indiana crew, DC5, RK, BTB.

1) Crews are prioritized, as a group can usually pull off more than an individual. We do not have spaces for individuals. Last year we had to create smaller spaces, which ultimately ended up sloppier, and were the first things buffed.

2) First contact, proven skills, first served: we ask that you send several pictures of your artwork. These will be measured against other flicks, and weighed first on a crew basis. If you are alone, or your crew is not dependable enough, we recommend you link with other individuals that you want to paint with to make a`crew for a day’.

3) Once the meetings begin, it is again first come first served. Those crews who arrive first receive priority. There were many people who contacted us, but did not come to the meeting…their loss.

We automatically reserve a certain amount of space for out-of-towners, so that they are guaranteed for their travels. This year we are asking out-of-towners to also submit work, because the hood needs quality painting when they do not know the painters. This year we are looking at a different location, so there will be less wall space and hopefully more concentrated interaction. Only ten crews and five individuals received paint last year, and this will probably be the case again. The majority of painters had to supply their own paint for their walls. Be prepared to not paint! I am preparing myself, because we have to establish how much space can fit how many writers, and we do not want writers crowding each other. Ultimately there are no promises being made now. We need flicks to put you in a possible rotation. Feel free to send any more questions about MOS Chicago.