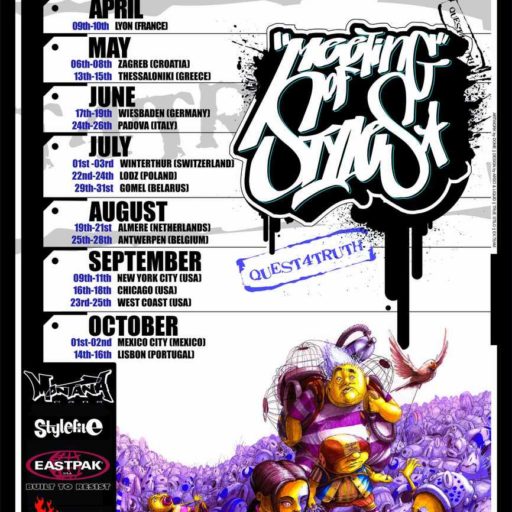 New York City runs a very strict Anti-Graffiti-Campaign. But eventhough we managed to do the MOS twice. NYC is the first destination of the MOS in the USA. The Meeting there is a very much scene-related event.

The original spot of the past two years was not available in 2005. The reason is simple: because of tagging around the hood the landlords were not really supportive this year, eventhough they really liked and enjoyed the jam in the past.

So we changed the venue to Brooklyn and then found the ultimate spot in the South South Bronx by the help of hte living Legend Cope. If you have ever been to NYC you know what Graffiti is about, over there. The whole city has been bombed hard for more than 30 years.
You find tags, throw-ups, pieces everyhwere. Due to this strong and long history, the city of NYC is totally against Graf. So it was and is not easy to find good spots and get permits for an event. The Jam started early saturday morning, after the walls had been primed the night before, the venue was ready.

Pretty fast writers came along ready to do their thing. The jam happened in a relaxed atmosphere. You know that sometimes the MOS-Orga. needs to be flexible depending on the city and its attitude towards Graf.

As we heard, the Vandal Squad spent the whole saturday waiting for writers at the Brooklyn-wall while everybody was up in the Bronx. Due to the situation and attitude of the city towards Graf the Jam was focussed just on painting. But eventhough writers had their sound-cars ready to hype it up with the stereo.

Some writers who participated: Cope2, TKid, Sen2, Pose2, Ghost, Sonic, YMI-Crew, RobotsWillKill, Ges, Dome, Yours from Germany, Made, Joys, Yama from Italy, Zore, Jinx, Hyde and Nerd from Chicago’s SB-Crew plus writers from France and Poland. Sunday the Jam continued. Writers came along to finish their works. Around afternoon, some heads didnt recognize where to paint and where not. Obviously the aerosol made it hard to recognise, so they bombed on walls they shouldn’t. After the Vandal Squad spent saturday waiting at the wrong spot, at sunday they knew the place to be. So they were present. A neighbor has seen the kids tagging and bombing around, called the police and out of the blue, agents jumped out of a cab and arrested three kids. Eventhough the cops didnt exactly know what the kids did, there was a click of handcuffs and a senseless discussion. They boy got arrested and spend a night in jail waiting for their high-speed trial. Things like this happen, when you dont know the precise situation of a city you are visiting.
Notice: things like this, make it harder for us to accomplish our mission. With every negative happening, you make it harder for us to bring back the MOS in the next year!