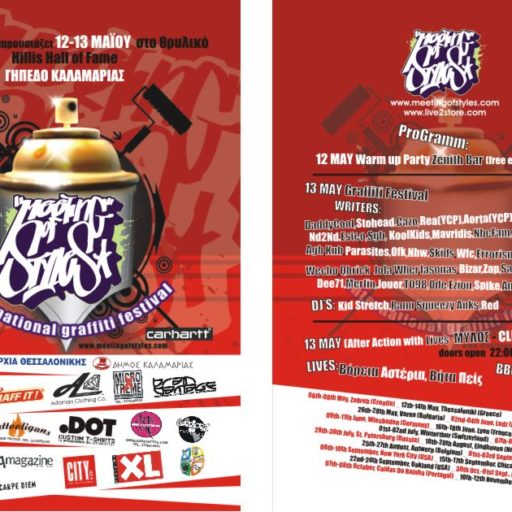 Thessaloniki, the second biggest city of Greece is a very nice and old city with signs from ancient cultures almost everywhere. Its one of these southern cities at the sea with nice bars, clubs, lots of fancy people and goood-looking girlies.

The Meeting of Styles came back again. The Live2store once again proudly presented the most important Graffiti in Greece, in the city of Thessaloniki. The spot, a famous and traditional Hall-Of-Fame at Kalamaria known as the oldest Graf-Hall in Greece.

The Live2store once again proudly presented you the most important Graffiti-Jam in Greece. The place to be this year was the famous Hilis Hall-Of-Fame placed at the football court of Kalamaria. The Jam started with a very fresh intro-party at one of those fancy, smooth clubs in the center of the city. Most of the line-up writers met here to connect, chill and chat. DJs were throwing a lot of the original oldschool-raps which caused a very nice vibe.

Saloniki – the second biggest city of Greece has a very nice and well connected scene. There are several walls and spots available for painting across the city. When you decide to visit the city, get in touch with the Live2Store. This spot has a great history and tradition of greek Graffiti. The 1st greek Graffiti festival happened here in 1995. Hundreds of writers from Greece and around the world passed this place and left a mark of their art.

Now, after 11 years, its time go back to the place it all started. The wall is located at the central street of Hilis in Municipality of Kalamaria. Many bus lines pass by the spot. From the centre of city you can take buses 5,6 and 7. About 70 graffiti artists from Greece and Europe were invited but approx a hundred from all over Greece came to rock the walls. The Jam started early in the morning with priming the walls, checking cans and concepts. A lot of people came to visit, buses passing by all day long. The vibe was very positive, based on communication and cooperation.

Greeks are very kind and open minded people – most of them. DJs were spinning records, writers rocking the walls. The painting was going on until late evening. By then people went home, get sober and ready for the after-show with most-wanted live acts featuring Boreia Asteria and Bita Peis, respected underground bands. The show happened in a housing-block with several clubs around plus an exhibition of local Graf-Art. Like this the Meeting Of Styles 2006 will end leaving us all waiting until next year.