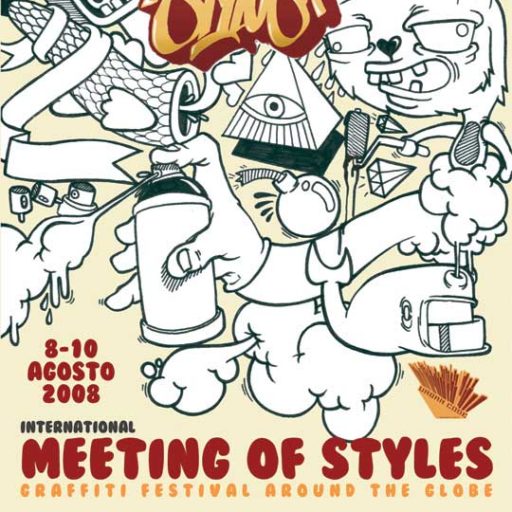 The italian MOS is established in Padova, near Venice since 2004. Through the time climate was good, in 008 the Meeting moves to Venice as there is serious Anti-Graf-campaign going on.

Venice has been known as the “Queen of the Adriatic”, “City of Water”, “City of Bridges”, and “The City of Light”. The city stretches across 118 small islands. The population estimate of 272,000 inhabitants includes the population of the whole Comune of Venezia.

The metropolitan area has a worldwide reputation for its fashion design and industry. Venice and its metropolitan area has a strong, active and creative Graf-scene. In recent time authorities started an Anti-Graf-campaign, so no doubt the MOS had to come here. The spot was an abandoned bus-terminal with lots of space around and walls to the main street, located very central.

No wonder cops had to stop along and check the permit, cause they couldnt believe their eyes. A lot of writers from all over Italy came to participate as well as from Germany, United Kingdom and New Zealand and gave a new outlook to the entire area.