For the first time MOS expands its horizon past Asia to Downunder! The chosen city is Melbourne, wellknow worldwide for its strong and long history of Graffiti!

Melbourne is the capital and most populous city in the Australian state of Victoria, and the second most populous city in Australia and Oceania. The name “Melbourne” refers to the area of urban agglomeration spanning 9,900 km2 which comprises the broader metropolitan area, as well as being the common name for its city centre. Melbourne consists of 31 municipalities and has a population of 4.4 millions as of 2013. Its inhabitants are called Melburnians.

The Melbourne rail network is based on a commuter rail model rather than a rapid transit model, with a focus on services at peak periods. A rapid transit system for Melbourne is currently in planning stages.


The spot is located pretty much downtown and contains sufficent wallspace. For various reasons – We have decided to keep locations unpublished until the completion of the event on Sunday – having said that – you KNOW where Melbourne’s iconic legal lanes are located – so come and find one of the friendly MOS reps who will be on-site and ask about more locations. 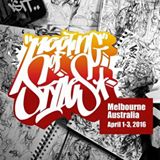