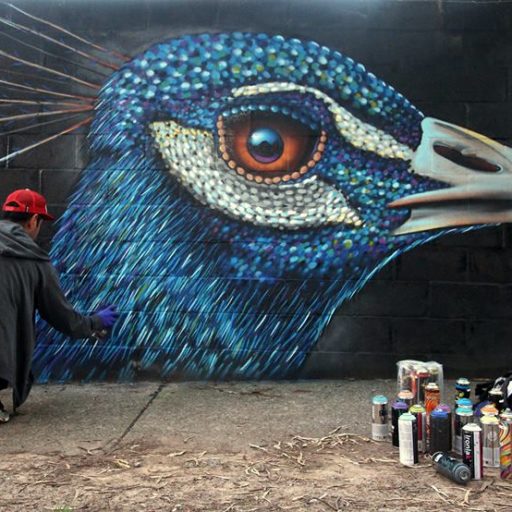 Sock (Wild Sketch) from Avignon (France): “Our world is a reflection of ourselves”

My tag comes from a video clip of Rage Against the Machine: Renegade of funk. But Renegade is very long, so I abbreviated REN. In addition, I later discovered that Ren was a word of Egyptian mythology and it was the written name of the person, which varied according to the progress that person had in society and was enclosed in a circle or bubble to protect it for eternity . That’s why I write my tag in a text bubble.

I’ve been painting since 2002, when with a friend from Highschool we went tagging after school. Graffiti is the most direct and sincere means of expression that exists. It is available to anyone who wants to say something and has the courage to translate it into the streets.

Meeting of Styles?
MOS is the most important graffiti event in the world, which serves to build bonds of friendship and learn from the best graffiti writers and street artists. It is also great that there is a global circuit of encounters.

Social media?
I think it is very useful, because they favor the diistribution of our work and help to generate networks. But I also think it is a bit overrated, it will always be better to see a graffiti live, on the street.

Inspirations?
My greatest inspiration is nature, because it is perfect. Unfortunately we have moved away from it and are destroying it.

Street art and big scale muralism?
I think it is necessary to counteract the immense growth of cities and to make them friendlier through art, which must respond to that scale of city. In addition I think streetart is useful as it is a tool of denunciation and social criticism.

Dislikes about Graffiti?
The egoism of some writers.

Love about Graffiti?
Friendship, fellowship, interaction with people while you paint and travel.

Your style in music?
I think it would be Soul or something like Eddie Veeder. Haha.

Most annoying thing of present?
The alienation caused by technology, mistrust between people and disinterest for others.

President or king, what would you change?
I do not think that kings or presidents can, or want to, change anything. But what is most urgent to change is social inequality, we must redistribute wealth, it is impossible that people are dying of hunger, while some accumulate in an excessive way.

Keep filling the world with colors !!!

Sock (Wild Sketch) from Avignon (France): “Our world is a reflection of ourselves”