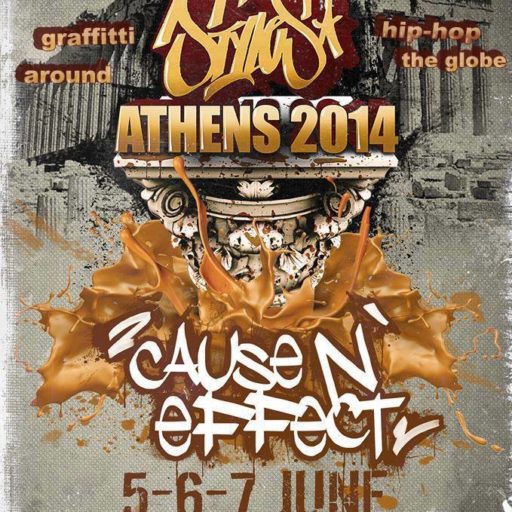 Economical and social situation in Greece currently is not easy. As elections are coming up for the originally scheduled date of the MOS, it was not possible to get a full permission to do the event as planned. This is the reason why we had to change the date at last minute. But eventhough, it is on!

Graffiti writers around the globe will be gathering for 3 days event. Music will cover the event all days. The spots is the municipal football stadium of Drapetsona and a tunnel.

For the foreign guests who have already booked flights and accomodation our local organisation is preparing an extra wall-project, the Meeting of Styles Secret Walls Project 31 May – 1 June (by invitation only) – Graffiti artists from Greece and abroad will create 2 murals on public schools.

Athens is the capital and largest city of Greece. It dominates the Attica region and is one of the world’s oldest cities, with its recorded history spanning around 3,400 years. Classical Athens, as a landlocked location was a powerful city-state that emerged in conjunction with the seagoing development of the port of Piraeus.

A centre for the arts, learning and philosophy, home of Plato’s Academy and Aristotle’s Lyceum, it is widely referred to as the cradle of Western civilization and the birthplace of democracy. According to Eurostat, the Athens Larger Urban Zone (LUZ) is the 7th most populous LUZ in the European Union (the 4th most populous capital city of the EU), with a population of 4,013,368 (in 2004). Athens is also the southernmost capital on the European mainland.