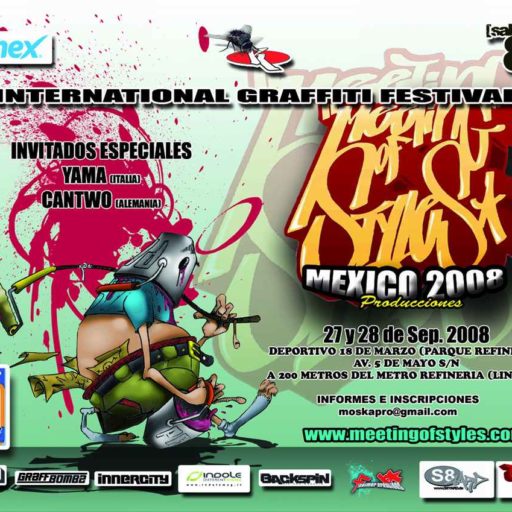 Mexico has a strong and long tradition of mural-painting. The scene is very vivid and diverse, the city crazy! A must which forced us to establish the Meeting over there. The city is totally bombed, Throw-Ups, Tags, Bombs everywhere.

Greater Mexico City includes 58 municipalities with a population of 19.2 million, making it the largest metropolitan area in the western hemisphere and the second largest in the world. As for many other Latin American countries, crime is among the most urgent concerns facing Mexico.

Drug trafficking rings play a major role in the flow of cocaine, heroin, and marijuana transiting between Latin America and the United States which has led to corruption, with a deleterious effect on Mexico’s democracy. Drug trafficking and organized crime have also been a major source of violent crime.

The 2008 spot is the same a last year, a huge park with a lot of walls in andoutside. Get ready to some fresh Graffiti-Art from Latin-America.