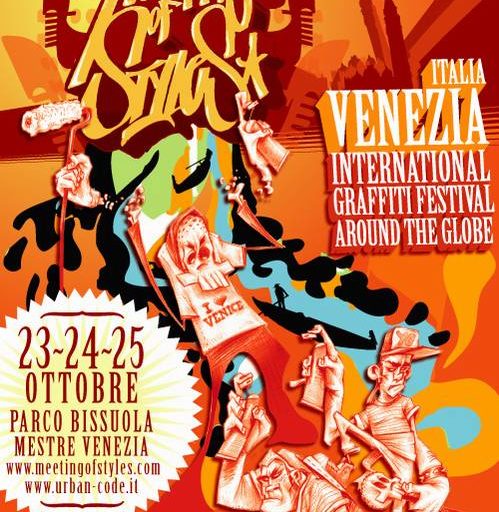 Due to the processes of bureaucrazy the italian Meeting had to be delayed to October.
But nevertheless our local orga is coming through with a new impressive spot.
After 5 successful Meetings in Padua and Mestre-Venice, with more than 4500 square meters of painted surfaces, the Meeting of Styles is back to Mestre by the support of Urban-Code.

In Italy the place chosen is the Bissuola Park, the green heart of Mestre. Since the early 90s the Park Bissuola was a meeting place for various realities of young people in the city, including skaters and writers. For years Urban Code, affiliates and the local writers claimed this space, even for the younger generations.

Because of the Meeting of Styles the opportunity has raised to bring the best italian writers together to leave their marks on the walls and redevelop the surfaces.

We want to involve citizens, associations and institutions in a constructive debate on the issues of spaces, the degradation and failure of national policies of repression. The Meeting of Styles in Venice will be a free event, open to the citizens, a festive occasion and reflection to meet people and… Meeting Of Styles: styles of letters and illustrations produced on site with a rich selection of the best Italian writers.