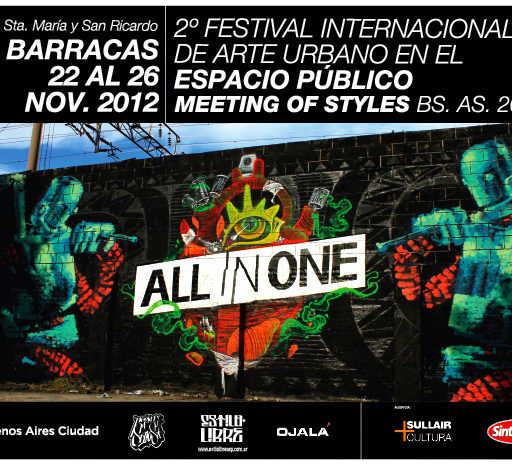 After the great success of the first argentinian MOS, we are glad to be back. The ministry of culture and ministry of public spaces are supporting the Meeting to the fullest with a long list of nice walls and spots!

The Minister of Public Space, Diego Santilli under the Arts-Program in public spaces and the Ministry Of Caba Culture Organisation and Freestyle present:

The best of Urban Art returns to Buenos Aires, the only international Urban Art Festival in Argentina “Buenos Aires Meeting Of Styles 2012 – All In One”

From 22nd to 26th of November 2012 the City of Buenos Aires will offer some of the best space for 100 of the most celebrated artists of the urban art movement involving unique spaces of the city in the barracks with its epicenter in the streets of San Ricardo and Carob.

The MOS, as it is known internationally, is a traveling urban art event that lasts few days in each city in which to perform. It was created in Germany in 2002 and since then had traveled to New York, Changsha City, London, Budapest, St. Petersburg, Sao Paulo and beyond. The artists will be painting walls and buildings close to the intersection of the two streets Santa Maria de Buen Ayre and San Ricardo in Barracas from 1pm every day.

Expect a great event featuring not only “classical” Graffiti, but also Street-Art and more innovative Mural-Art.

Buenos Aires is the capital and largest city of Argentina and after São Paulo the second-largest metropolitan area in South America. Greater Buenos Aires conurbation includes several districts with a population of around 13 million.