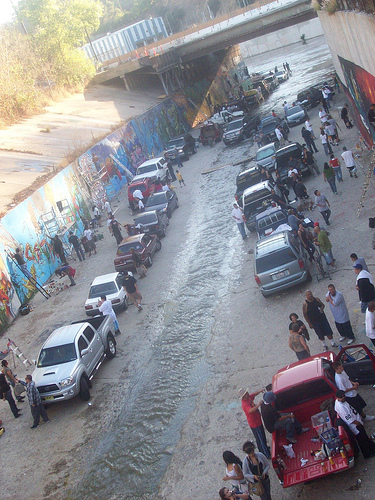 “The L.A. River holds a special place for graffiti artists in L.A. Many artists who have grown up painting its walls have utilized its grand scale to make their mark, consequently shaping the identity of this city,” Man One explains.

Over one hundred artists from LA were scheduled to meet artists from San Diego, Bay area, Mexico and far away as Europe to spraypaint a 10,000 square foot section of the concrete waterway at the Arroyo Seco Confluence in Highland Park.

But then, after rain friday night, the flood came and the walls, located in side-arms of the river, were not accessable. The river itself, is almost dry during summer time, but when it rains, it collects the water of a huge area in a strong tide.

Too bad for out-of-towners, as the event had to be postponed. The event kicked-off the River City Visionz, a collaborative mural production and festival directed by Man One Design, Friends of the Los Angeles River (FoLAR), and Hadley Media involving hundreds of local and international artists scheduled to be held in a Downtown section of the L.A. River in the fall of 2008.

After it was raining during week, the river-painting-event happened a week later – paralell to the mexican MOS. As you can see, the vibe must have been pretty smooth. These street art visionaries transformed the L.A. River’s stark facade into a unique and vibrant collaborative mural.

“The opportunity to produce a sanctioned graffiti mural event in the river will be anincredible statement about the evolution of the art form and the role that the river can play in a newly revitalized downtown. It is an honor to bring international recognition to L.A. by producing thisevent for the Meeting of Styles, who bring with them a global network of graffiti art aficionados.”

At the original date, you could meet and greet some of the participating local and visiting artists at the official Meeting of Styles L.A. Blackbook session at Crewest. Artists participating in the MOS-LA project were present to sign sketchbooks and support the c exhibit “River City Visionz.” Visitors enjoyed a live painting performance by keynote artists and live music by Myk Mansun (Majestik Headquarters/Los Angeles), DMNOLOGY (Knomadz/Chicago).

Spectators can best view the mural painting from Avenue 19 Bridge, just south of Figueroa Avenue. 451 N San Fernando Rd., Los Angeles, CA 90031 CLICK HERE FOR A MAP It’s in the LA River, so there is no real address. The Avenue 19 bridge goes over the river part that will be painted. www.MOS-LA.com

The MOS-LA team would like to thank all the hundreds of artists, families, and friends who attended and participated in this historic event. It truly was a great community event full of great art and a great vibes!