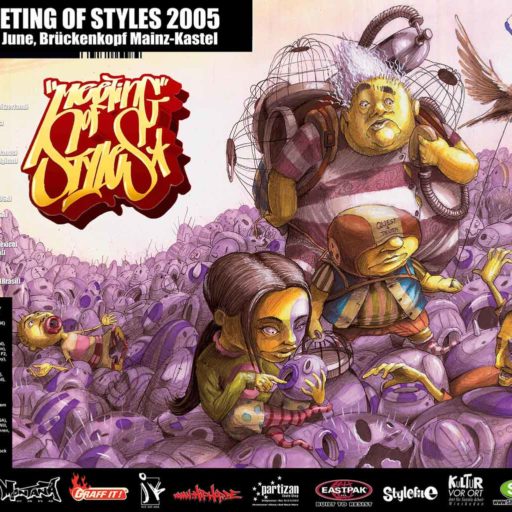 After the int. Wall Street Meeting has made the city of Wiesbaden a worldwide known place of Graffiti-Art, the city has torn down the original spot in late 2002. But, a new spot had been found – a huge underpasscomplex with a lot of walls, next to the river.

Mainz-Kastel. Dont be confused by the name. This part belongs to the city of Wiesbaden. The Brückenkopf, actually the biggest Hall-Of-Fame in the Rhine-Main-area, contains more than 1500qm on several walls. It is very well reachable by train and bus.
Due to the recreation of the Schlachthof-grounds most of the old halls and walls are gone which made it impossible to have a good jam in the well-known-Wiesbaden-style at the original spot where it all started.

So we moved to the bench of the river Rhine next to the bridge that leads you the the real city of Mainz. The jam already started thursday as some of the foreigns flew in. On friday we got ready to hit the spot. Very early we got a phone-call from the city-authorities, saying that one wall, we already have had a permission for, now is illegal. Out of the sudden the mayor of Mainz called the one of Wiesbaden, blablabla between amigos, permission withdrawn.

Interesting how fast politicians can act, if something happens they dont like. If they would act the same way in the interest of the people… So out of the sudden we had a wallspace-problem. To solve we tried to get another wall which is located right at the underpass-complex. Called this “(in-)competent official” and tried to get the permission for a wall that has already been tagged. But this man obviously has no feeling for art, so he told us to do our “sh**” down there, but not on this beautiful grey wall. It didnt make any sense to talk with him, so left him standing and let him go back to his destiny – his desk. More and more artists. meanwhile have arrived, grabbed cans, picked the walls and started to rock. More than 80 artists have been on the venue over the two days. Saturday more artists arrived and since the coucils had taken us this wall and didnt want to
give us the other one, we had to send some of them to another spot like 5 km away .Its quite interesting: the “common” people do make a difference between complex productions, art, bombings and tags, but most officials and politicians obviously only think in frames which is a shame.

Eventhough some negative rumors have been spread about our guests, which are not worth a single comment, except that the source of the rumours is really unserious. So in total the event has been absolutely peacefull, with no littering, no vandalism or any troubles.
No critics from the police or people who live near-by, just from one single person which must have been jelous.However, the jam was great, the vibe was peacefull and creative in the sign of colaboration adn exchange, the artworks are simply great. If you are around Rhine-Main-area you got to take a look.