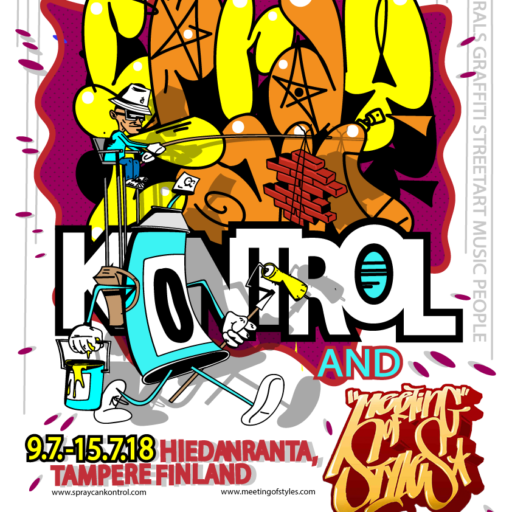 For the second time, Spraycankontrol and international graffiti event Meeting Of Styles are going to happen together at the old factory area of Hiedanranta, Tampere. The event is held in the middle of Finnish summer, 9-15 July 2018.

Tampere is a city in southern Finland. It is the most populous inland city in any of the Nordic countries with a population of 364,000 in the metropolitan area making it the second-largest urban area and third most-populous individual municipality in the country.

There are going to be around 50 to 60 artists painting the walls of Hiedanranta. We will bring painters all the way from Uruguay, United States, Spain, Hungary, Germany, Netherlands, Sweden, Russia and Estonia. And of course we will have a wide range of Finnish quality graffiti – and street artists!

All of them are here to amaze you with their different styles! Spanning wide from mind blowing 3d painters over the wondrous wildstyle artists and the photo realistic phenomena to the classic letter aficionados.