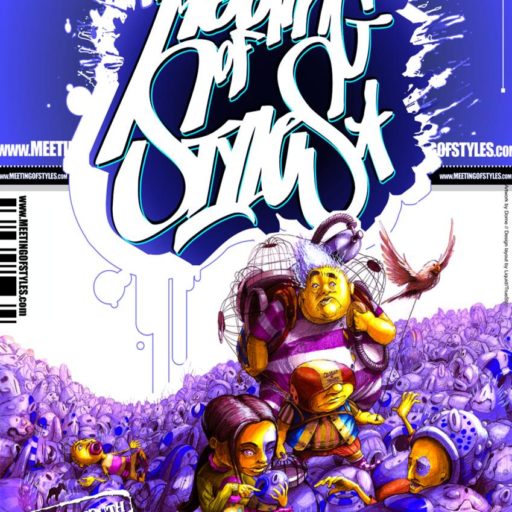 There were rumours saying the belgian MOS would not happen. Just a rumour. Probably the reason is the fact that Muntplein – the original spot – was under construction. But eventhough, we dit it again!

Due to the constructions, the spot wasnt available for the well-known Antwerp-style. It is and was possible to paint there, but not possible to get an official permission. But eventhough Uncle B.U.G.T. – the graffiti-pimp of Antwerp made it possible. He got a new wall at a nice youth-center near the Muntplein. The spot was very central in a yard with a huge wall of approx 80 m length and height of approx 5m plus a couple of smaller walls around.

Eventhough there have been constructions and fences, writers did a couple of walls at the Muntplein. In the past the graffiti-part has been the major attraction of the jam, but due to the constructions, this year the weight has been more equal concerning the other disciplines of hip-hop-culture. This year it has been a real Hip-Hop-Jam which brought all the disciplines close together. The vibe of the whole jam was pretty smooth. People and especially the scene is very friendly in Antwerp; no competition or beef between the writers and crews. No matter, if its writers who work at night- or day-shift – they all come along with each other without any disrespect, dissing or beef. Thats why the Jams in Antwerp are very smooth and chill. People come together to have a great time.After the jam had started friday in a relaxed atmosphere with a dvd-show at night, saturday was the main day with a huge one-on-one-breakdance-battle (organised by Down 4 Kix) and a cool concert at night featuring St.Andries MCs from Antwerp, Sober and Dribbla, Xeno and Ava B. from the UK, Pesadilla from Spain, Kriso and PTF from Germany plus Fatty K, the Beatbox King (featured on the Antwerp-film on the 2002-DvD).The breakdance-battle has been amazing.

There are so many young and highly-motivated breakers in that city who show the vitality of the scene. Beside of local writers like Focus, Casrock or Gunti, heads came from UK, Denmark, Netherlands, US and Italy.