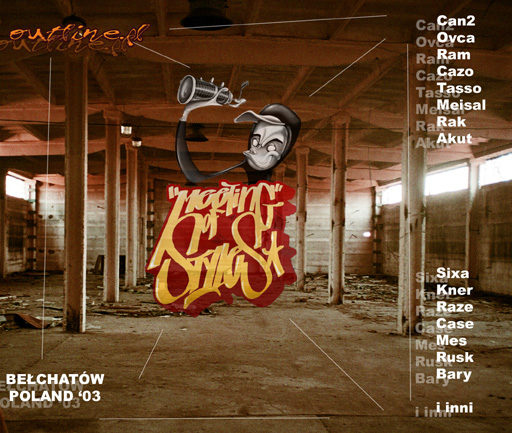 In 2003 the polish MOS was originally scheduled in Lodz, but due to election of new mayor, we didn´t get a permission, so we had to move 35km south to Belchatow. The spot was located in the center of the city in a nice little park with a central stage.

Łódź Province is a province in central Poland and named after its capital Lodz. It includes 43 cities with a total population of 2.5millions while Belchatow has about 60.000 inhabitants making it a small, but nice city.

Beside of a relaxed atmosphere, an openminded attitude concerning Graffiti and a lot of socialistic housingprojects, the city has the largest coal fueled thermal power plant in Europe. Eventhough we had to move the venue, a lot of artists from all over Poland made a long way to participate at the event. Beside of Graffiti there was a large program including beatbox, breakdancing and rapshows. Beside of polish rappers, Jizny Pioneer made the way from Czech. Rep. to rock the mics.

All days long the artists worked on their murals while at night polish rappers and breakdancers took over the scene. Not to forget the mad beatbox-crew qwith their unique skills. About 40 artists from all over Poland and 10 from Germany made the walls look pretty fresh. Amount of visitors over two days: 2000