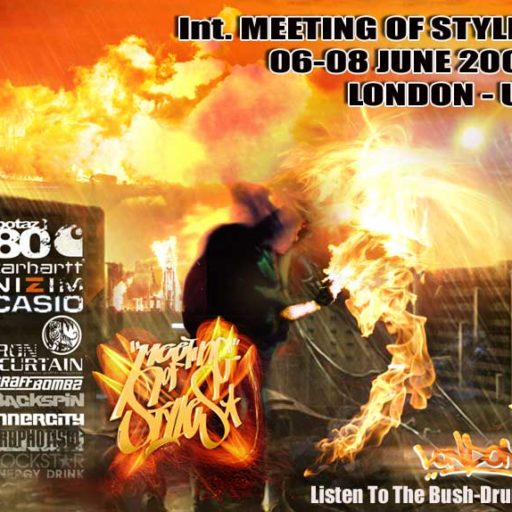 We are proud we were to bring the British leg of the Meeting of Styles to London for the first time. End Of The Line has joined forces with NIZIM, Throwdown and Meeting Of Styles, bringing together the fundamentals of hip-hop in a Herculean Battle of the elements.

Bringing it back, Aerosol’s finest unite for an Exhibition of the Ages, where the Titans of Hip-Hop combine under one roof in a Culture Clash not seen since the days of Cool DJ Herc and Street-Corner Rap. Welcoming the Disenfranchised Youth of our forefathers, the Playboy Generation at the crossroads of Profits vs. Prophets, invoking the spirits of Legba.

The option to bring the MOS to London came up very short. Our schedule had already been done, when End Of The Line came up with this wall and the idea to present the MOS. As to then England was still a gap on the 2008-map we were ready to join .As the spot was small and the scene is quite huge we were forced not to publish the spot on the web.

The Blessed Ones were revered above all others, held as Heroes among Men and Shepherds of the Weak. Though the event was quite small, it happened in a good vibe . About 20 artists from around the UK, Italy and Greece worked on a huge wall illustrating the Blitz of London. The event was crowned with a nice nice party on top of the building.