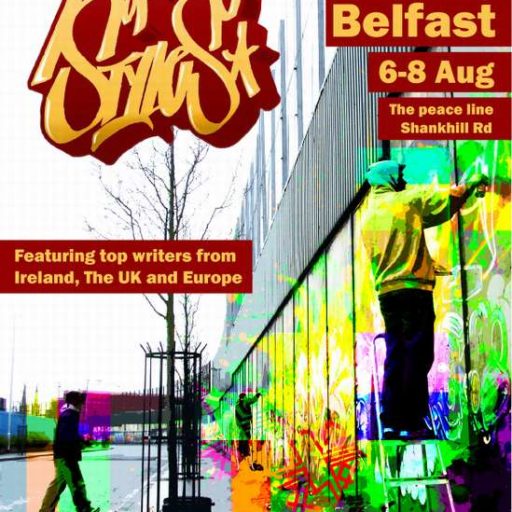 The place to be: the famous Peace-Wall of Belfast, off Larnock Way in the Shankill district, west Belfast.

“Belfast plans were going great.. lots of guys from Scotland, England, Wales coming, guys of a high standard. We had Stylo Solo One and Mear from VOP-Crew in London..big guys who have been coming to Ireland since 1994, however never before painted Belfast and haven’t been here for over ten years, apart from solo one who visits regular. Rmer Hoxe Cruel Vapors Crew, top guys from wales !!! Demo from Holland, Corze, Old-School London writer. Easy Riders…probably the most well known and biggest scottish Crew, Estum from Scotland, Dir One from Lithuania, TDA-Klann with Rask, Sums, Maser, Beta from Liverpool uk, RTM-Crew from Ireland, Dex, Duso, Crap, Baqsr, TDS from Belfast, Ciar and Dris.

The whole peace line is now officially done end to end..1mile of burners! And most of it to the very top also ! Thanks for your support as u made this dream a reality! This year by far saw the best and biggest burners on the wall and people really went for it! Plus the wall has become huge tourist attraction now! Hard to believe 2 years ago it was all just concrete…the power and unity of our graffiti culture has helped to soften a very troubled environment. This year we also had local kids come to help us buff paint the walls and many locals came out with their cameras…all goof positives for the future!