After the wicked mexican 04-expirience the MOS strickes back in the country of chicas, enchilladas and desperados. Eventhough last year has been mad, its been done again.

Mexico-City is a crazy place. The city is so huge and spread that its almost incredible. Approx 25million people live in this endless djungle. Obviously the city has been tagged and bombed hard for years and years – tags, throw-ups and runners everywhere. Not only the girlies in Mexico are hot as hell, but also the weather. The mexican MOS was a great inspiration.

The jam happened in the barrio Nezal Coyotl, with more than 3millions inhabitants. 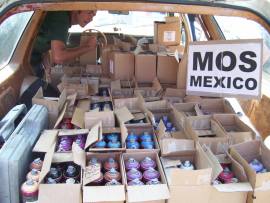 La Fiesta GrandeWriters from all around Mexico like Guadalajara, Tijuana, D.F., Monterrey have participated as well as artists from Italy, Germany, Guatemala, USA. It started Saturday around 10am with priming the walls and catching cans. Pretty fast each of the more than 150 writers has snatched his space ready to rock and to burn the walls of more than 1km length. Around afternoon, the sun was burning, the Red Bull-Lounge with soundsystem, drinks and shadow had been built up, DJs and Rappers took care of the right vibe with native raps and lyrics. The mexican scene is quite huge, very active and very polite. Writers shared wallspace and cans in a relaxed atmosphere of communication and cooperation. After a hot and dusty day, around evening everybody got ready to get a shower and relax a bit.

In the night an after-party happened in a nice club near-by. Beside of rap-tunes a dope rock-band was playing. Later the night a serious battle between two Breakdance-Crews closed the first day. Sunday was more relaxed, but still hot and dusty. Writers came along to finish productions and to exchange contacts before leaving the town. Good cans are very expensive so mexican writers work a lot with brushes and cheaper paint, but eventhough the outcome is high-quality. To see the quality and quantity of the artworks was a great inspiration. Approx 2000 people have come by to visit the event.