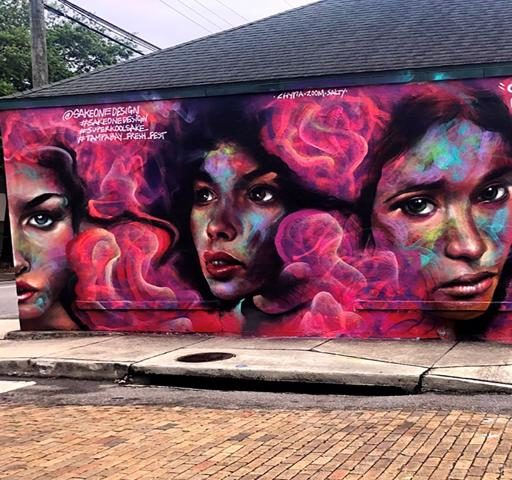 In 1987 I went by the name Phantazm, but this became a little long, so I was itching for something new. I would shorten it to “Phan,” or use other aliases, but I wanted something permanent.

A girl I was into at the time suggested the name “Saki.” I was already interested in Japanese culture and had been painting manga characters since 1985. So thought, “why not,” and have been using the name “Saki” ever since. My style of graffiti is specifically geared towards the NYC aesthetic of writing and burners. The transforming of letters into intergalactic funk, while still maintaining the original formula of letter structure and form, but then adding my own twist to it. I love the whole process of painting, the movement of your body. The problem solving of how to use the spray can without the use of any aids such as tape, cardboards, etc. Just letting the letters ride and get loose. Graff is always fun for me. When I mixed it with commercial work, it got to be draining. Sometimes the client and I wouldn’t vibe, and they would somehow become the expert on graffiti, that was annoying.

For the last 25 years I have been keeping them separate, graff for fun, and commercial work for money. Social media is another tool that can be used to promote your magic. Social media can also create trends that can be seen all over the world in an instant… this can be good and bad. It seems to me that once an artist becomes popular, everyone copies that style, following the trend. This oversaturation can hurt the scene as well. I guess you could say that I’m still on the fence when it comes to social media.
I believe that San Diego is the first city on the west coast to have a NYC graffiti scene, beating out L.A. and San Francisco by a year or two. San Diego has a long and healthy graffiti scene, going all the way back to the 50’s. The scene is San Diego right now is mostly crew based. You just see crew names up one the freeways and other typical places. I am used to writers putting their own names up, in plain sight, which is something I like more than crew names. I have “been there and done that,” with throwing up your crew name, being that I was part of the first wave crews here in the SD scene. When I first started writing, along with my partner Kaze, our goal was to be up in your face, hit walls that were out in the open, to pull off what others thought impossible.