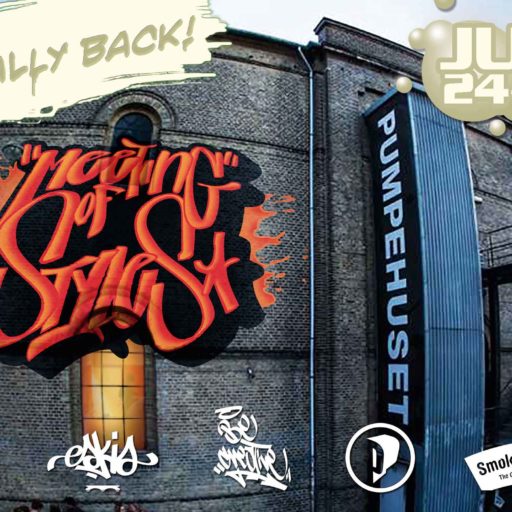 Copenhagen participated at MOS in its first years and since then became a gap on the map. After years of absence Meeting of Styles proudly returns to the danish capitol providing a forum for the rough, tough and highly innovative scandinavian Graffiti-scene to meet with some international guests!

Copenhagen is the capital and most populated city of Denmark, with a metropolitan population of 1.9 million. It is situated on the eastern coast of Zealand, 164 km (102 mi) east of Odense and 28 km (17 mi) northwest of Malmö, Sweden.

The city stretches across parts of the island of Amager and contains the enclave of Frederiksberg, a municipality in its own right.

The greater Copenhagen area has a very well established transportation infrastructure making it a hub in Northern Europe. The Copenhagen S-Train, Copenhagen Metro and the regional train networks are used by about half of the city’s passengers, the remainder using bus services. Nørreport Station near the city centre serves passengers travelling by main-line rail, S-train, regional train, metro and bus. Some 750,000 passengers make use of public transport facilities every day.

Be Creative, Street Studies & Pumpehuset are proud to announce that the worlds largest graffiti festival ”Meeting Of Styles” is finally returning to Denmark.

24th to 26th of July will Meeting of Styles be deploying a heavy graffiti atmosphere in Copenhagen.

The event is free, so there is no excuse not to stop by during the weekend. Line-up is set, but stop by for a chat, cold beer or whatever you fancy on an excellent summerday.

On top of all the dope ass painters we also got some music for y’all: