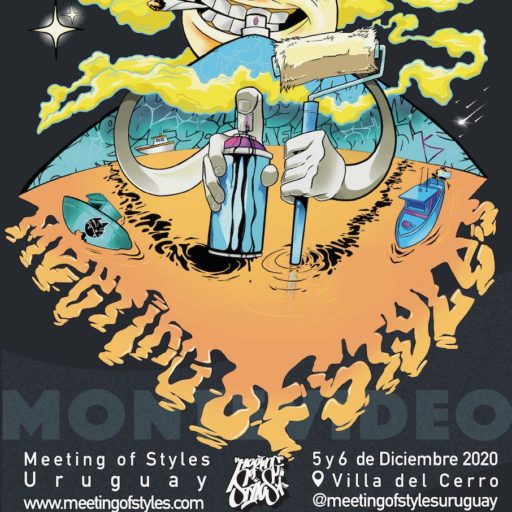 Very proud that despite the pandemic we were able to expand MOS to another country: Uruguay. The place to be was the capital Montevideo in the legendary Cerro neighbourhood. This is the home of many crews and is located to the west of the capital. Eventhough the country was facing the first year of the pandemic with many cultural shut-downs the event was a sucessful two day Meeting at a wall by the beach. There was also music and Djs and many people from the hip hop scene attended.

Originally scheduled for more artists, despite the pandemic 21 artists left their pieces in over 200mt wall. The spot is located next to the sea and has sufficent wallspace for all types of rocking! Villa del Cerro | Montevideo | Uruguay

Thanks to them and to those that couldnt jump on the plane due to travelling restrictions. According to the 2011 census, the city has a population of 1.3 million. Montevideo is situated on the southern coast of the country, on the northeastern bank of the Río de la Plata. The city was established in 1724 by a Spanish soldier as a strategic move amidst the Spanish-Portuguese dispute over the platine region. The 2019 Mercer’s report on quality of life, rated Montevideo first in Latin America, a rank the city has consistently held since 2005. As of 2010, Montevideo was the 19th largest city economy in the continent and 9th highest income earner among major cities.